With the chaotic pace of development and expansion of global metropolises, traditional fabric of cities have become hybridized with the new to form mutant and hybrid species of the urban terrain. The new metropolitan city is a site of natural selection between the new, the old, the new old, and the old new through processes of transition, negotiation, mitigation, preservation, erasure and reconstruction. And within the political, economic, social dynamic of urban environments fueled by forces of globalization, discussions of preservation and cultural identity can only progress under the rubric of nationalism, tourism and marketability.

As biologists who embark on travels to far distant lands to discover new and hybrid species of the ecological system, we too embark on this trip to map out the hybrid species of the urban ecological system into a Manual of Mutants, Hybrids, Endangered, Super Species (MMHESS). In the turmoil of the urban survival of the fittest, strategies of negotiation ranges in the realms of Territory, Program, Visual, Tectonic, Symbolism, Typology, Objectification and Supplements. We hope to investigate the morphology of natural selection of urban territories to map methodologies of survival between the old, the new, the old new and the new old.

The metropolises of Japan, Korea and China is a unique habitat where a homogenous habitat based on close similitude of religious, philosophical, social, cultural philosophy and life style were subject to an extreme transformative processes of modernization and globalization. The old and new capitals of the three asian countries, Kyoto and Tokyo, Gyeongju and Seoul, Xi’an and Beijing, as habitats of the Super Species, become the site of observation to investigate and document the conflicts and negotiations between the traditional fabric of the city and the new urban transformations of globalization and its agencies. 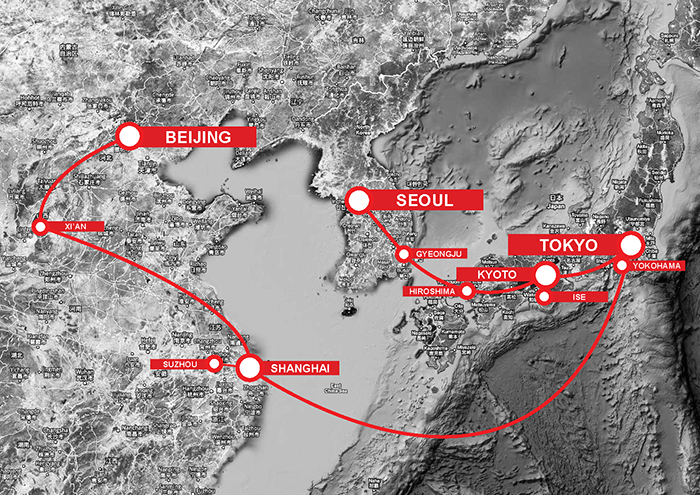