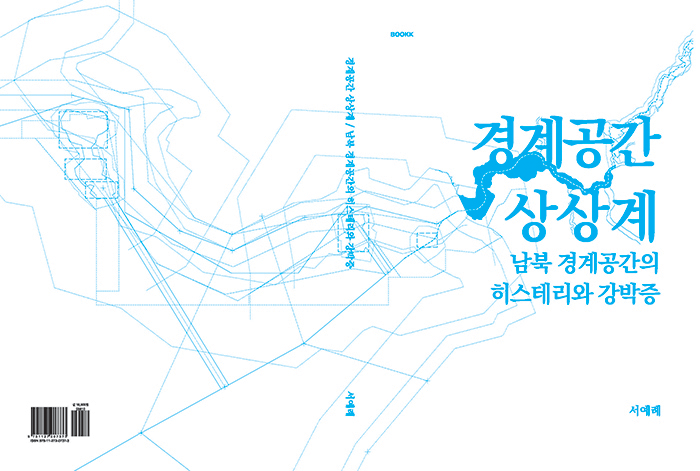 In the Koreas for the past 60 years, three border typologies existed per the 1953 Korean Armistice Agreement. What is not discussed is the discrepancy between what was defined and what exists in reality. The border that was defined by the Armistice have been constantly adjusted by the topographical, natural, ecological forces of the sites. This produces and contains many in-between spaces between the language and reality.

The first type is the DMZ which is the border on land. According to the Armistice, “A military demarcation line shall be fixed and both sides shall withdraw two (2) kilometers from this line so as to establish a demilitarized zone between the opposing forces.” Although the Armistice map demarcates the northern and southern boundary lines as an exact 2km offset of the Military Demarcation Line, the reality on the ground is much more divergent due to both armies having shifted the borders to more topographically strategic areas within the rugged terrain. The territory of discrepancy that exist between the map and reality produces questions as to the jurisdiction and ownership of the land, especially since the jurisdiction of the southern side of the DMZ is under the UN Command.

The second type is the Han River Estuary. According to the Armistice, the river is “open to civil shipping of both sides wherever one bank is controlled by one side and the other bank is controlled by the other side.” Historically rivers have been a popular choice for politico-jurisdictional boundaries. Whereas a legal border assumes a permanently fixed line, a river is a transformative dynamic landscape that constantly shifts and moves, making the river border a territorial ambiguity. The Han River Estuary border is a legal condition of ‘condominium’ where two or more sovereignties share equally dominium and exercise their rights jointly along the river. But at the Han River Estuary, an expansive ‘temporal land’ emerges twice a day during low tide, which posits viable possibilities of an area where co-habitation is possible.

The third type is in the open waters of the West Sea. “…(A)ll the islands lying to the north and west of the provincial boundary line between Hwanghae-do and Kyonggi-do shall be under the military control of the Supreme Commander of the Korean People’s Army and the Commander of the Chinese People’s volunteers, except the island groups of Paengyong-do, Taechong-do, Sochong-do, Yonpyong-do, and U-do, which shall remain under the military control of the Commander-in-Chief, United Nations Command. All the island on the west coast of Korea lying south of the above-mentioned boundary line shall remain under the military control of the Commander-in-Chief, United Nations Command.” This is in the most ambiguous and contested border type. Due to the ambiguity of the language of the Armistice regarding the location of the border, the various interpretations of yet to be agreed to international maritime laws, access issues for Port Haiju which is a major import/export harbor for North Korean ships, the large tidal flats with gentle bottom slopes that create mudflats that are sometimes as much as 10kms wide, and as the habitat of the highly prized blue crabs that are central to the fishing industry of both Koreas, the West Sea around the five islands is one of the most controversial yet spatially opportunistic transboundary territories.

The dilemma that exist between the desire to define and fix permanent borders and boundaries vs. the non-static ecological systems that cannot be contained can be explained through the ‘open texture of language’. “Whichever device, precedent or registration, is chosen for the communication of standards of behavior, these, however smoothly they work over the great mass of ordinary cases, will at some point where their application is in question, prove indeterminate; they will have what has been termed an open texture.” This is best exemplified in river properties and river borders where the legal definition of the line as boundary is difficult to maintain in space and time due to the natural transformations of the topography and land formation as a result of water movements. Due to the open texture of language, text and map agreements of border zones inherently contain ambiguous territories that exist between paper and reality. For spatial opportunities, it is important to explore the gaps and opportunities that exist between the abstract and legal notations of the border sites with the realities on the ground. The dynamic nature of natural and artificial environments defy static legal definitions of territory and properties. This is where we can find possibilities of interpretation and intervention for resilient spatial scenarios.