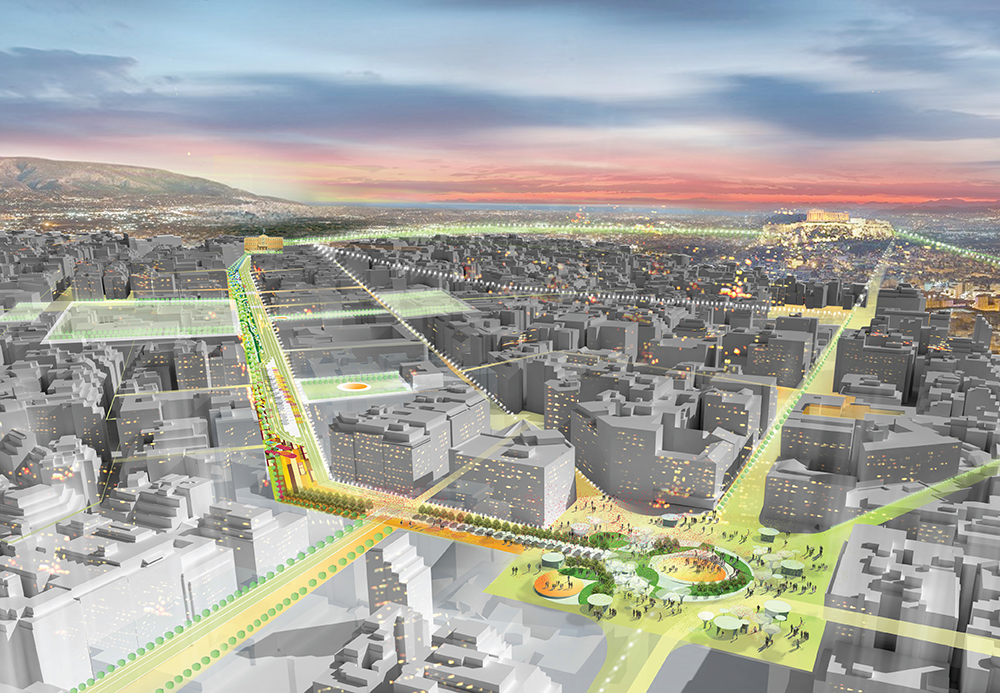 Crisis as an Opportunity
Crisis is an opportunity to transform the city. The project does not aim to upgrade the city center to look better, feel better and function better than what was there before. The project envisions a new way of occupying the city that re-conceptualizes Athens. We propose a city made, owned and maintained by the people. We propose that big changes made through small moves. We propose the beginnings of an ecologically sustainable city. We propose an urban infrastructure that reformats the cultural, communal, commercial, and civic relationship of the people to the city. 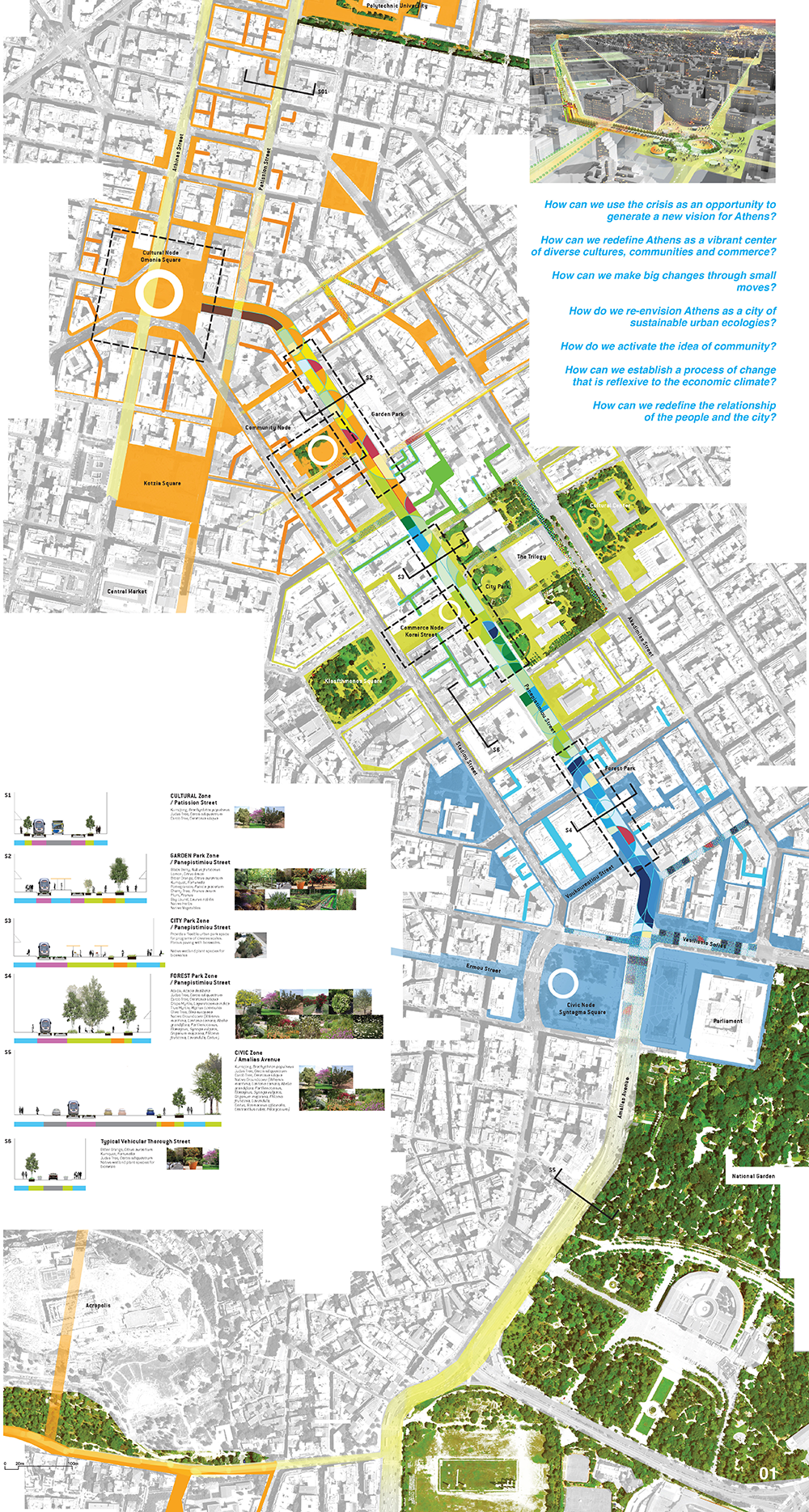 Park City
Athens lacks park spaces due to its history of unregulated urban development. We propose a linear park that becomes a central activity zone as well as a connective infrastructure into key public nodes within the city.

People City
The crisis has initiated active public participation by the people, which should continue as the main mechanism for the future of the city. We propose to use this opportunity to setup a self-initiated participatory system for a city owned, created and managed by its people.

Activity City
This is an opportunity to integrate the non-institutional and peripheral into the center of the urban fabric. The project is to be a catalyst for further implementation throughout the city.

Sustainable City
Athens suffers from the typical urban ills of escalated levels of air pollution, urban congestion, inadequate public infrastructures, waste management issues and low level of recycling. The project proposes to use this as an opportunity to educate and engage the people on sustainable transportation, water management and recycling systems to ensure the step by step process of transformation for the rest of Athens for a sustainable urban infrastructural system. 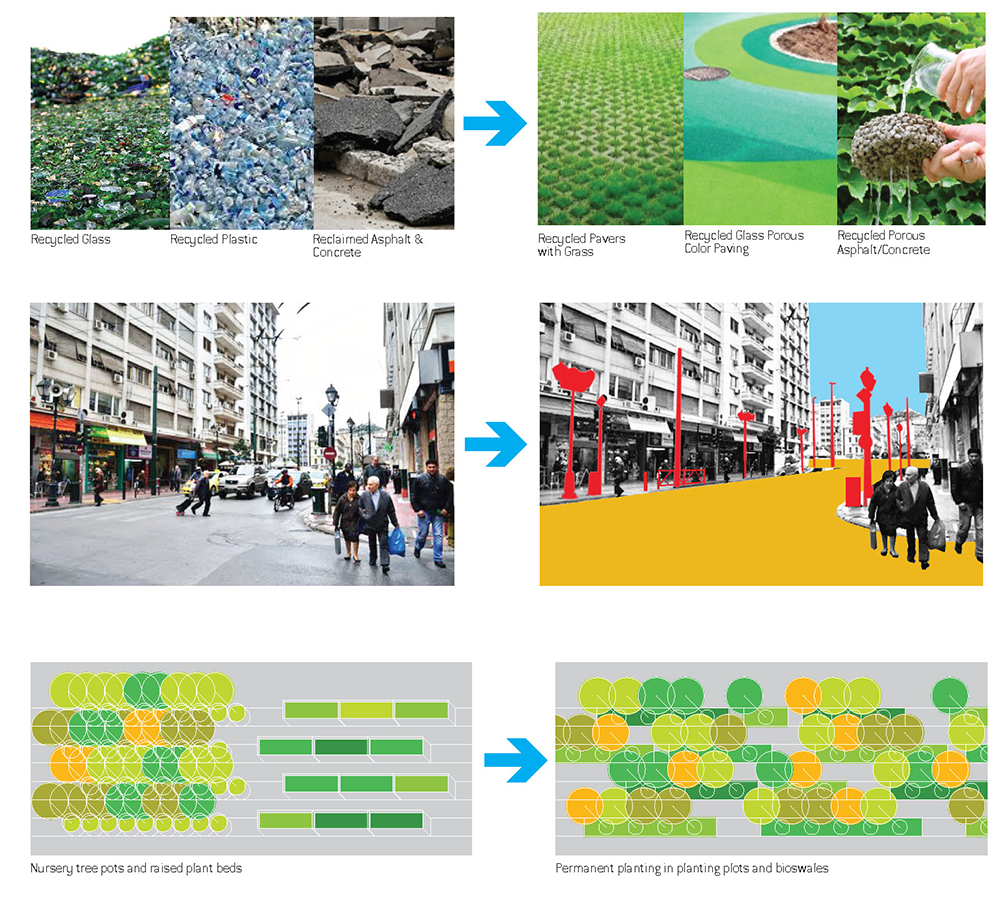 1. Urban Rings / Small Gestures, Big Change
The project proposes three small architectural interventions in the three Zones become the symbolic and active spatial element that announces the beginning of change. The three interventions are distinct in character but differ in scale and program allowing a wide range of activities to occur within them and around them. As a visible destination point, it is an urban infrastructure at an architectural scale that establishes and initiates the public sphere of the sites.

2. Urban Phasing / Temporary and Permanent
The project speculates a gradual implementation of the proposed scope through three phases. The different phases 1, 2 and 3 can exist concurrently throughout the site adding diversity of program and spatial interpretations while allowing for flexibility in the scope and the schedule of the implementation.

3. Urban Rooms / Diverse Spheres
The project proposes urban rooms of different scales along the Promenade Park that can be adapted by the public. It can be utilized as semi private living rooms for families or become gathering places for groups or become a dance floor for tango dancers. The interpretive possibilities engages the Park as a playful space that can stimulate interaction and evolution of the city as a community.

4. Urban Sustainability / Recycling and Peeling
The project proposes to incorporate sustainable processes and construction as an integral part of the making of the city by the community.

Recycled glass, plastic, rubber and paper collected through the park and the city and all reclaimed deconstruction materials such as asphalt and concrete will be sent to partnership paving material recycling companies to be processed into recycled paving materials for the Phase 2 and 3 construction. The public will have an active impact to the implementation and progress of the construction schedule which will engender communal ownership and responsibility for the project.

5. Urban Reuse / Infrastructure as History
The project proposes to reappropriate the existing street infrastructure as part of the historical strata of the Park. As a city infused with deep layers of history, the present also becomes part of the history of the city through its reappropriation. The existing street infrastructure such as traffic lights and signs that are no longer needed will be painted according to the color scheme of the Zone and become integrated into the new streetscape of the city.

6. Urban Habitats / Sustainable Ecology
The project proposes to create micro habitats for native plants as well as insects and bird species. The Garden Park and will implement native plant species that are more agricultural such as perennial, leaf, fruit or root vegetables, herbs and fruit bearing trees. The Forest Park will implement native plant species that are more typical to the Greek landscape as an extension to the National Gardens.
In Phase 1 and 2, plants will be planted in planters and raised plant beds as nurseries that can be replanted permanently into the ground in Phase 3. In Phase 3 bioswales will be implemented in all locations for surface runoff and flood control in the rainy seasons and conservation of water in the dry seasons.

7. Urban Streetscape / Transportation and Landscape
The envisioned transportation infrastructure will produce a new type of streetscape for the center of the city. The Promenade Park will be the first stage in establishing the foundation for reducing private vehicle access into the city center and enhancing public transportation through the expansion of the subway, tram and bike systems.
Planting strategies will enhance the sustainability of the streetscapes through incorporation of native species which uses less water, converting tree pits into bioswales for runoff control and cleaning of water, implementation of porous paving areas and the increase of edible species as part of the urban agriculture initiative. 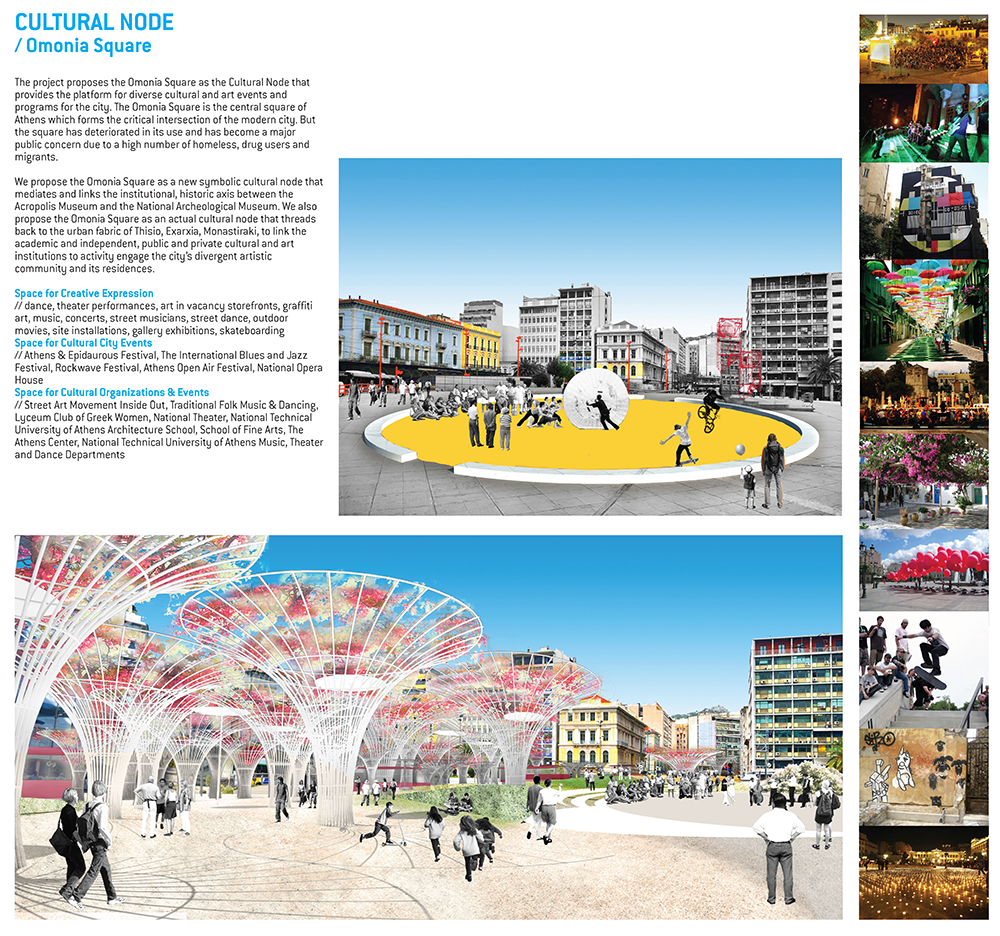 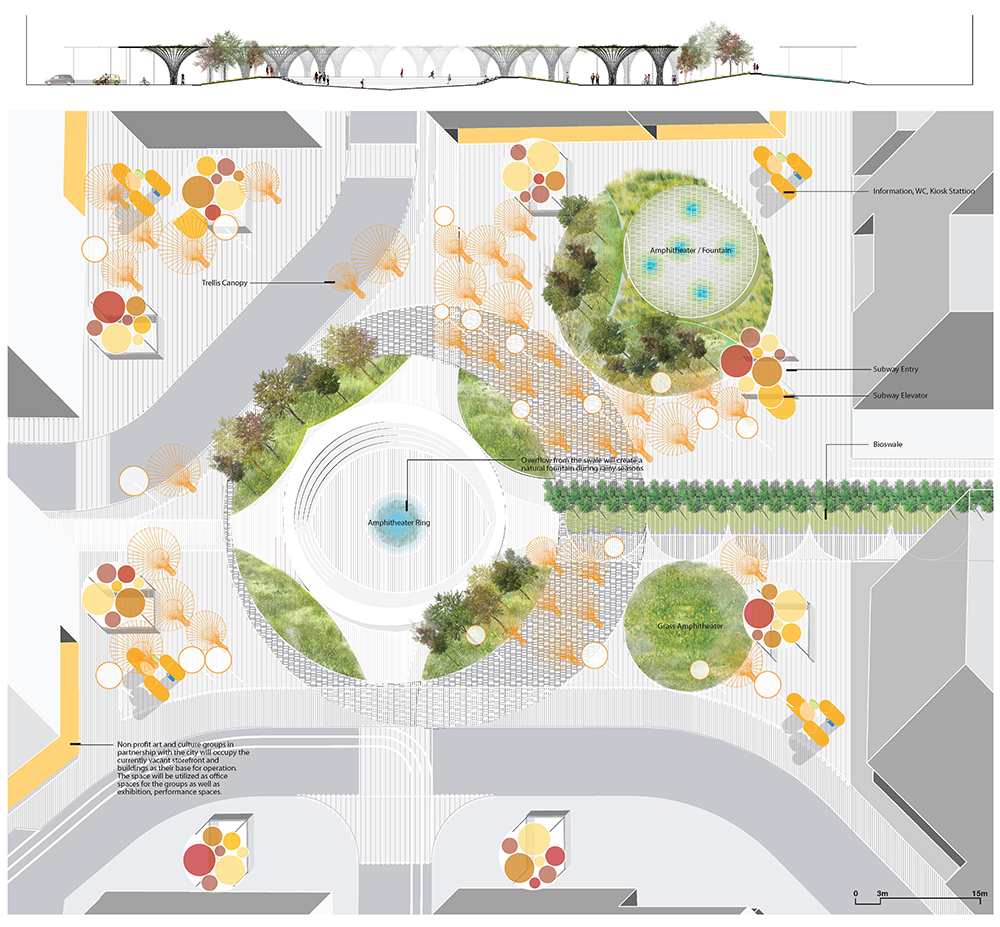 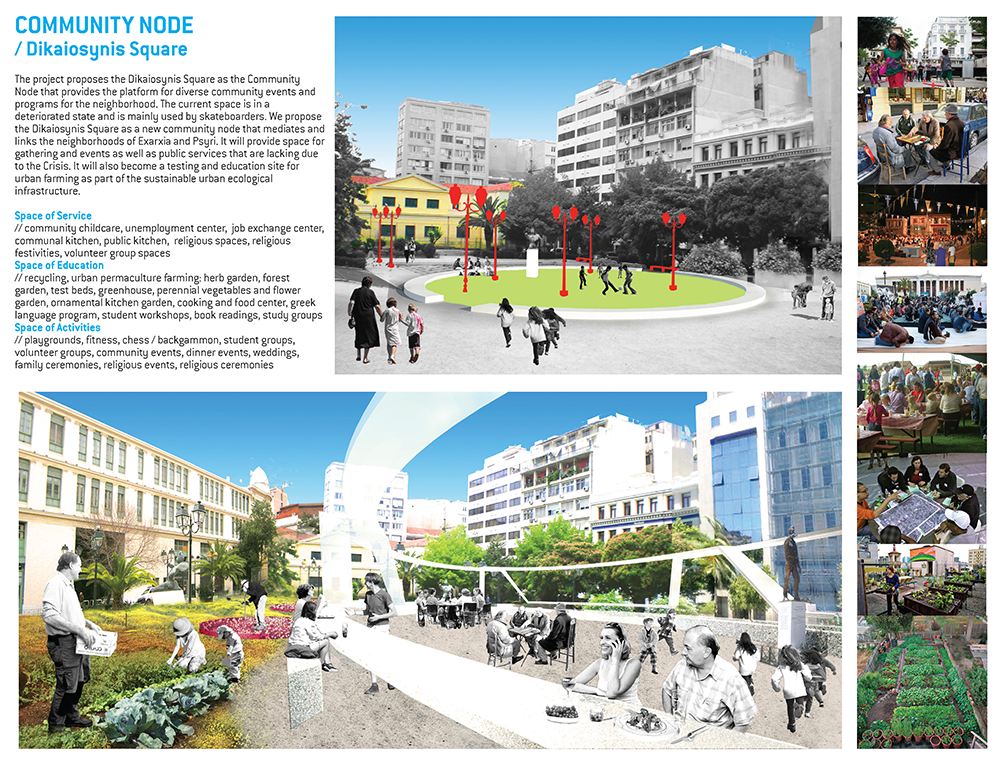 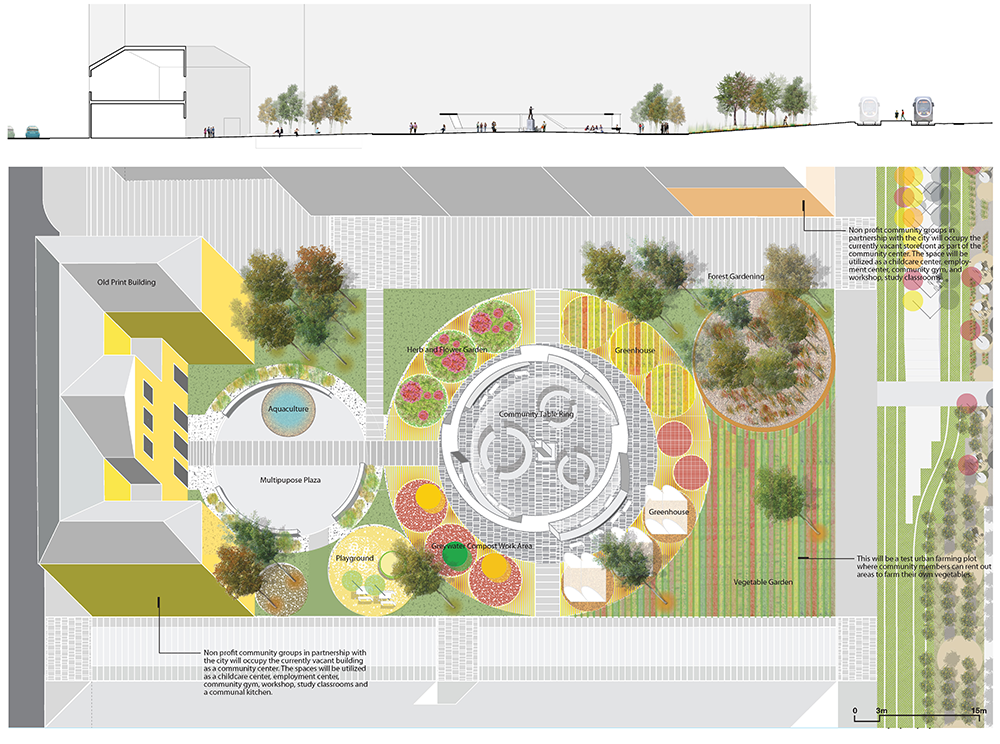 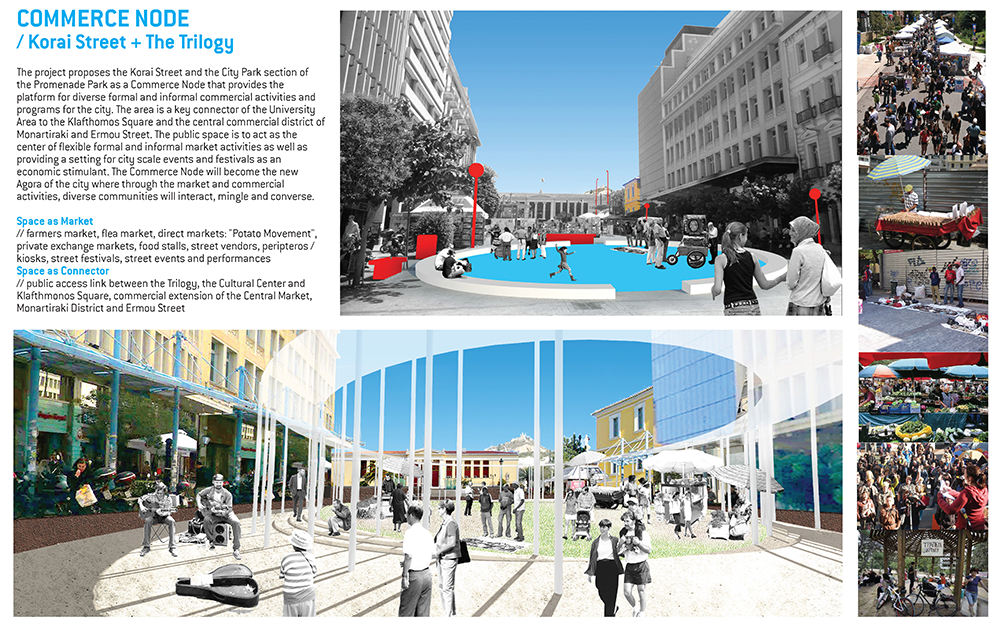 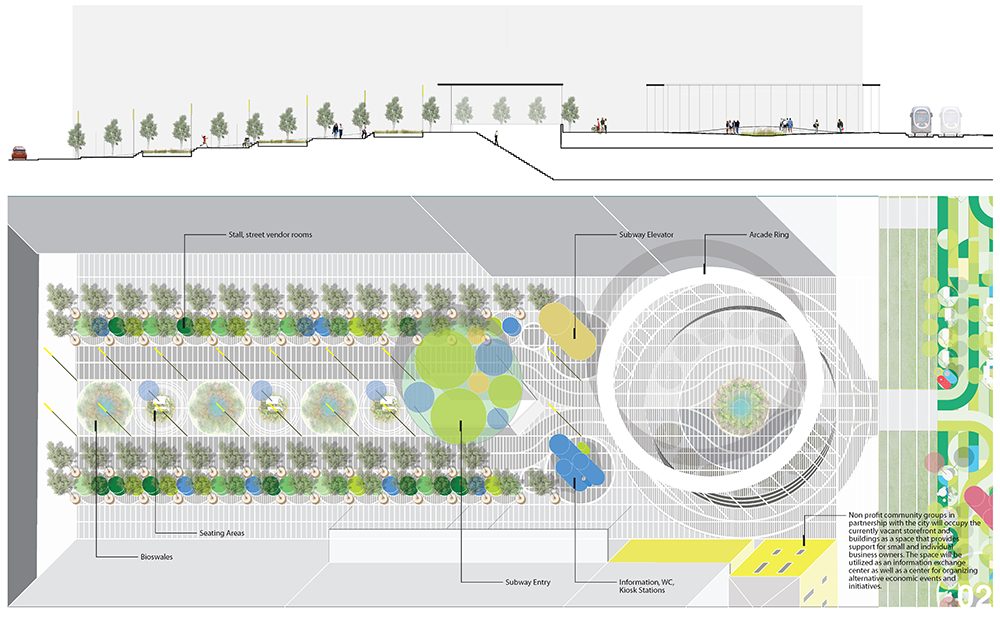 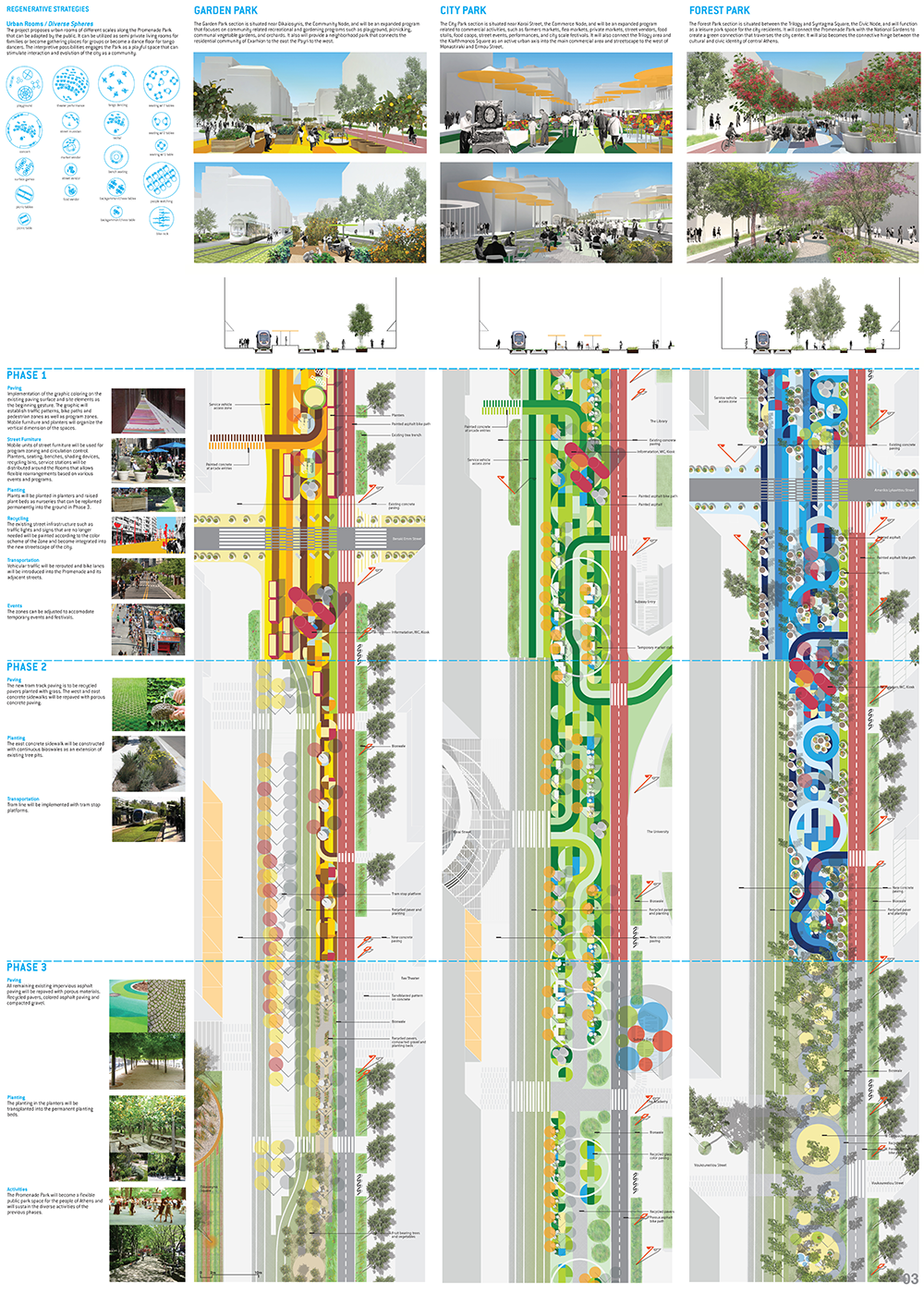 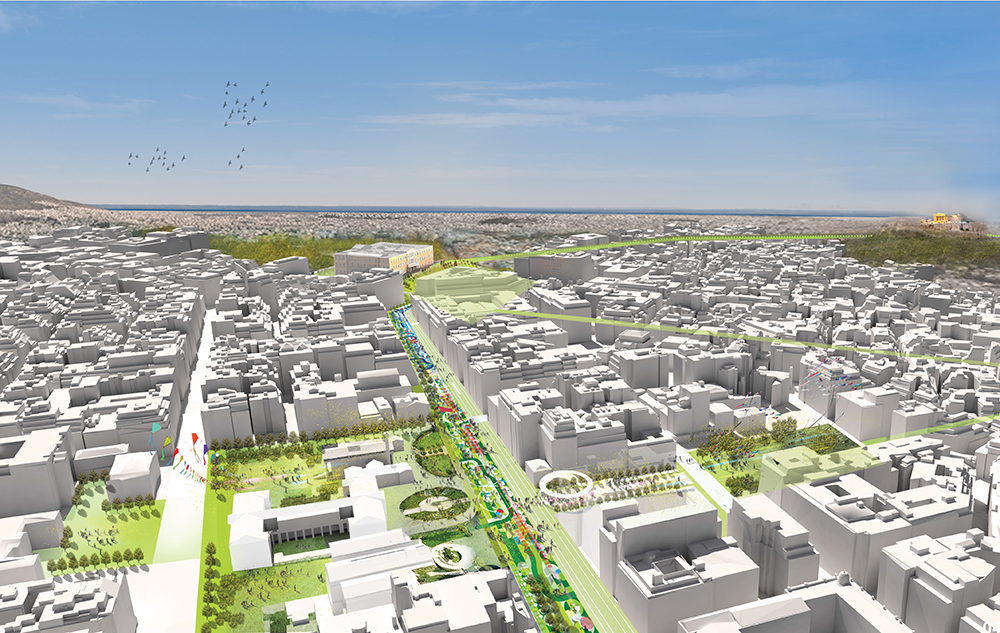