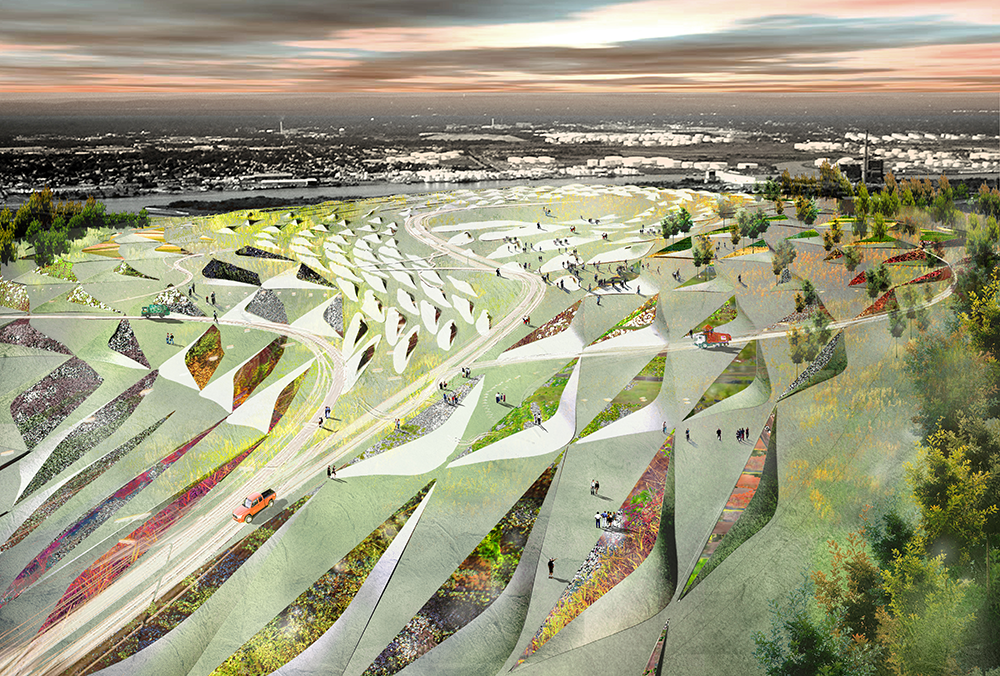 Dumpscape reimagines a topographic infrastructure by deploying erosion control retaining berms of recycled materials to create a working landscape that expands its infrastructural reflexivity. Rather than think of infrastructural landscape as a means for aestheticized technocratic leisure garden that ignore sustainable development issues of the region, we propose a working landscape that can be built, adjusted and maintained through active involvement of its various actors (city and government agencies, private recycling companies, fresh kills management, energy companies, non-profit environmental organizations, resident visitors, tourists, educational institutions, etc.). The various topographic conditions of the berms will provide programmable surfaces for solar energy collection, agricultural terraces for topsoil production, deeper soil depth for diversified planting as well as providing windbreaks to create microclimates for vegetation, wildlife and recreational and educational programs for the park. 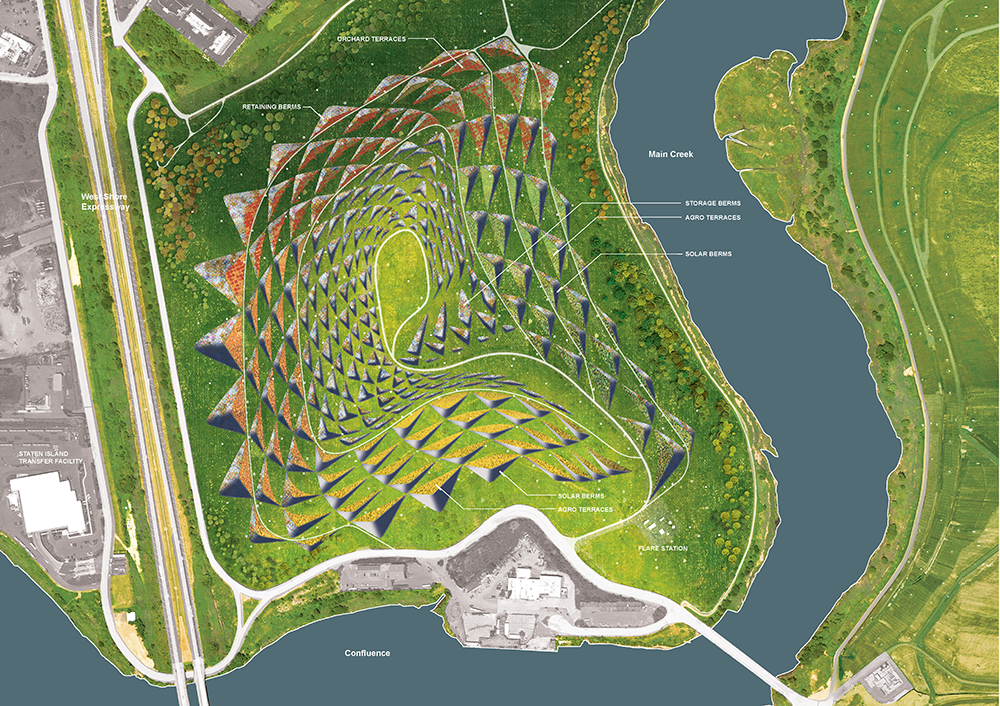 WASTE. But It’s Still Here.
Although Fresh Kills has opened a new chapter, the nightmare of the city’s waste disposal still remains. New York City produces approximately 13,000 tons of solid waste per day which is now sent to 13 privately owned waste transfer stations in minority waterfront neighborhoods in Brooklyn, Bronx, Queens and Staten Island and sent to other major landfills out of NY in Pennsylvania and Virginia. The increase in carbon emissions and the city’s trash disposal cost has been the invisible negotiation that had to happen behind Fresh Kill’s spectacular recreational transformation. And with the increased cost of waste disposal, the city had to do away with plastic recycling completely between 2002-2004 and currently operates a limited recycling program that results in a landfill diversion rate of 15%(DSNY Stats, 2011; US national average is 33.8%, EPA) compared to a 99% diversion rate of countries like Germany(Eurostat, 2007) .

RECYCLING. For a Sustainable City.
Although green meadows cover the landfill mounds and wildlife is returning to Fresh Kills, we cannot forget that the waste we produce still goes somewhere, but just not here. Ultimately producing less waste through recycling is what will become the cornerstone of a more sustainable City of New York. A survey by the Natural Resources Defense Council shows that the rate of recycling in NYC has dropped since Fresh Kills was closed, from 20 percent in 2001 to 16 percent in 2011. Dumpscape proposes to become the center of a recycling initiative and education efforts for the city.

LANDFILL. As a Productive Landscape.
Landfill reuse through capping and planting has become a standardized way to remediate prior dump sites. But the problem of traditional landfill cover system with topsoil and vegetation over geomembrane is soil erosion due to minimum soil depth and sloped conditions of the landfill mound. Also the open sloped mounds are exposed to weather conditions that make it difficult to consistently maintain vegetation cover leading to overall loss of topsoil and organic nutrients. Dumpscape proposes a self sustainable remediating landscape through a new productive topography. 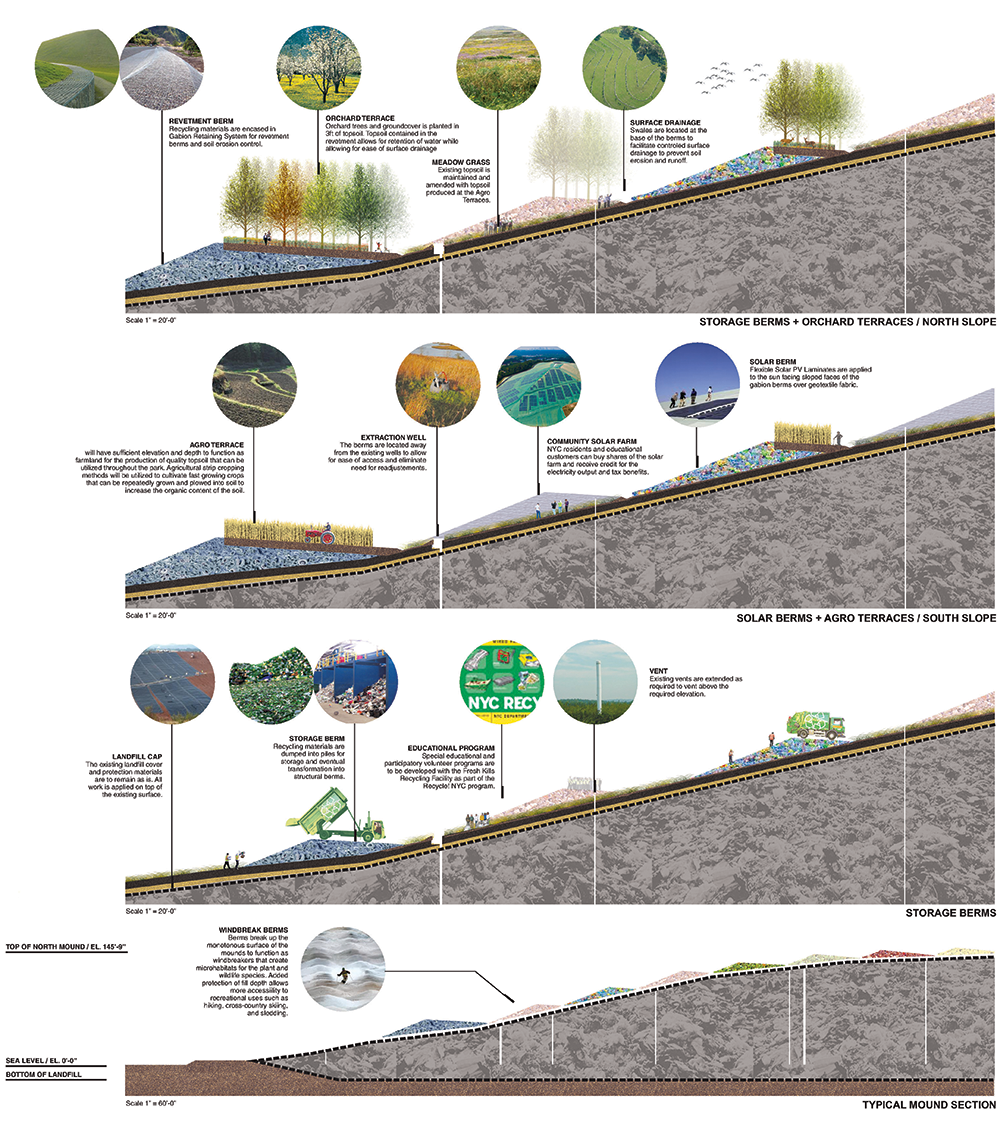 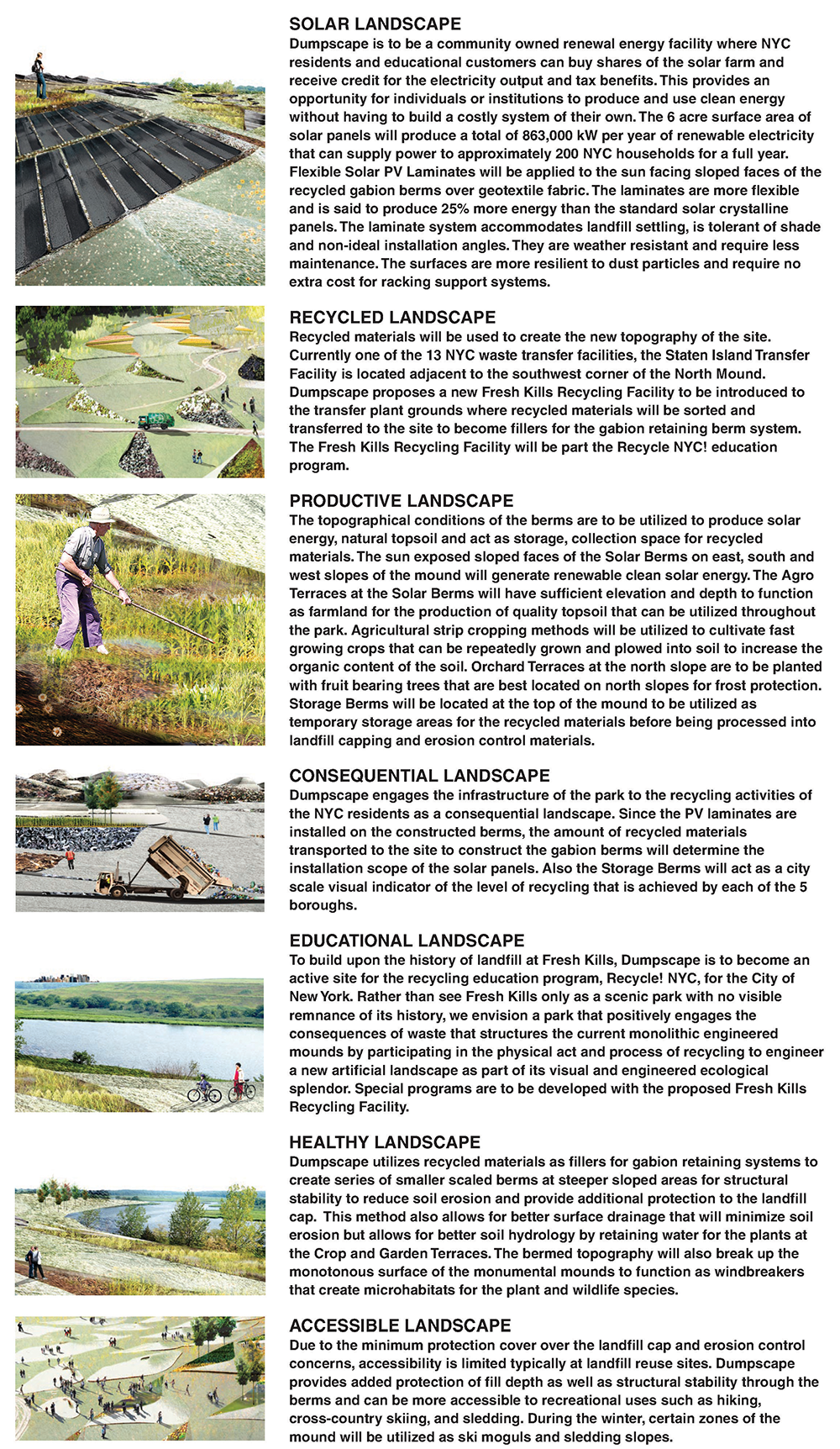