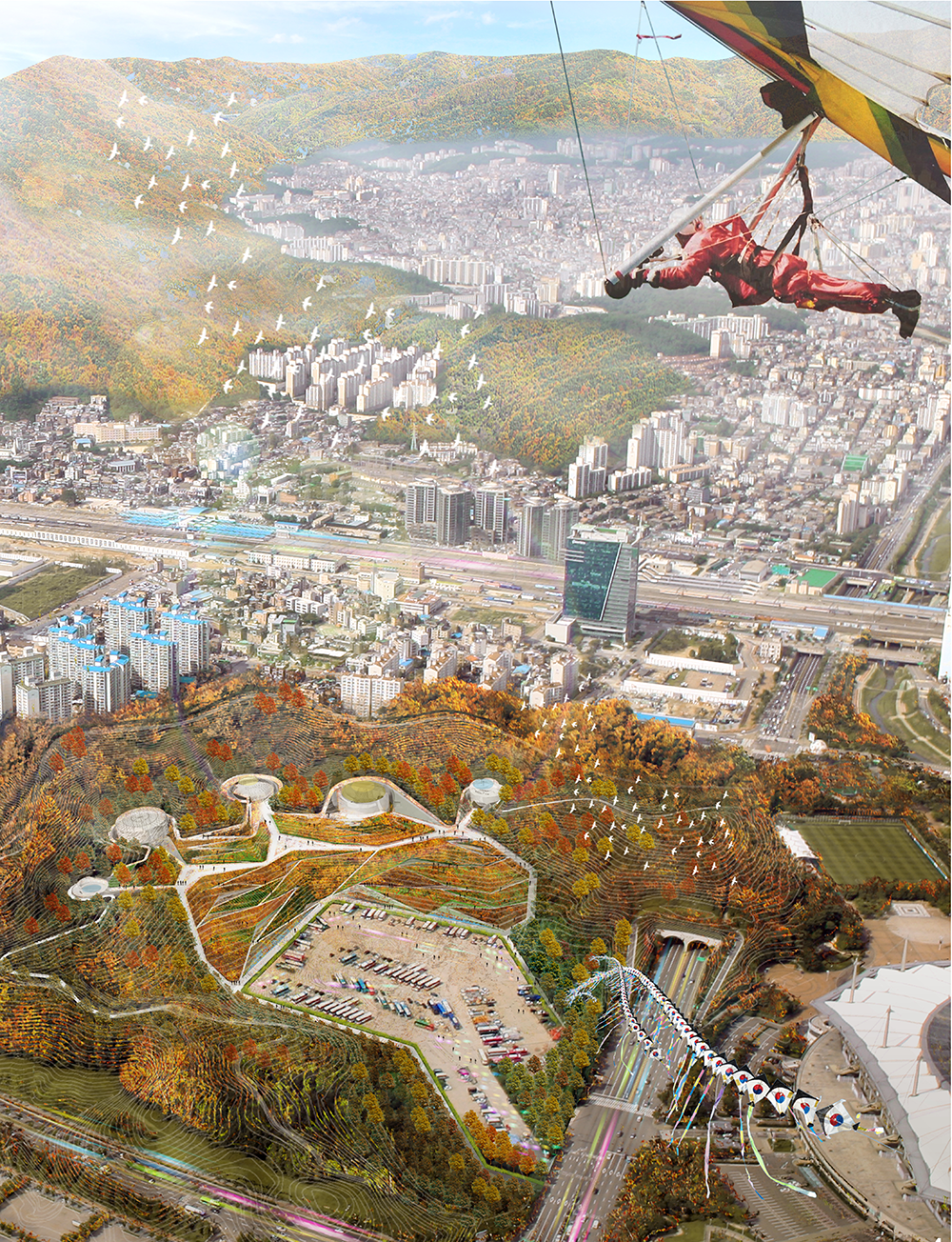 CAMOSCAPE celebrates the infrastructural history of the Mapo Oil Depot and the Mapo neighborhood by expanding the strategy of “camouflage” as a new urban typology of sustainable cultivation and cultural production.

The five oil tanks were a critical energy reserve for the city of Seoul during its phase of massive growth and expansion. As a high-risk infrastructure, the oil tanks were dug deep into the densely forested topography and were painted with camouflage patterns so as to be “hidden” from view. CAMOSCAPE re-adapts the “camouflage” strategy of the tanks in the
landscape as a celebration of the history of the site as well as to propose a new programmatic strategy between infrastructure, landscape and the city to create a cultural terrain that is performative and transformative in response to the vibrant urban landscape of Seoul. 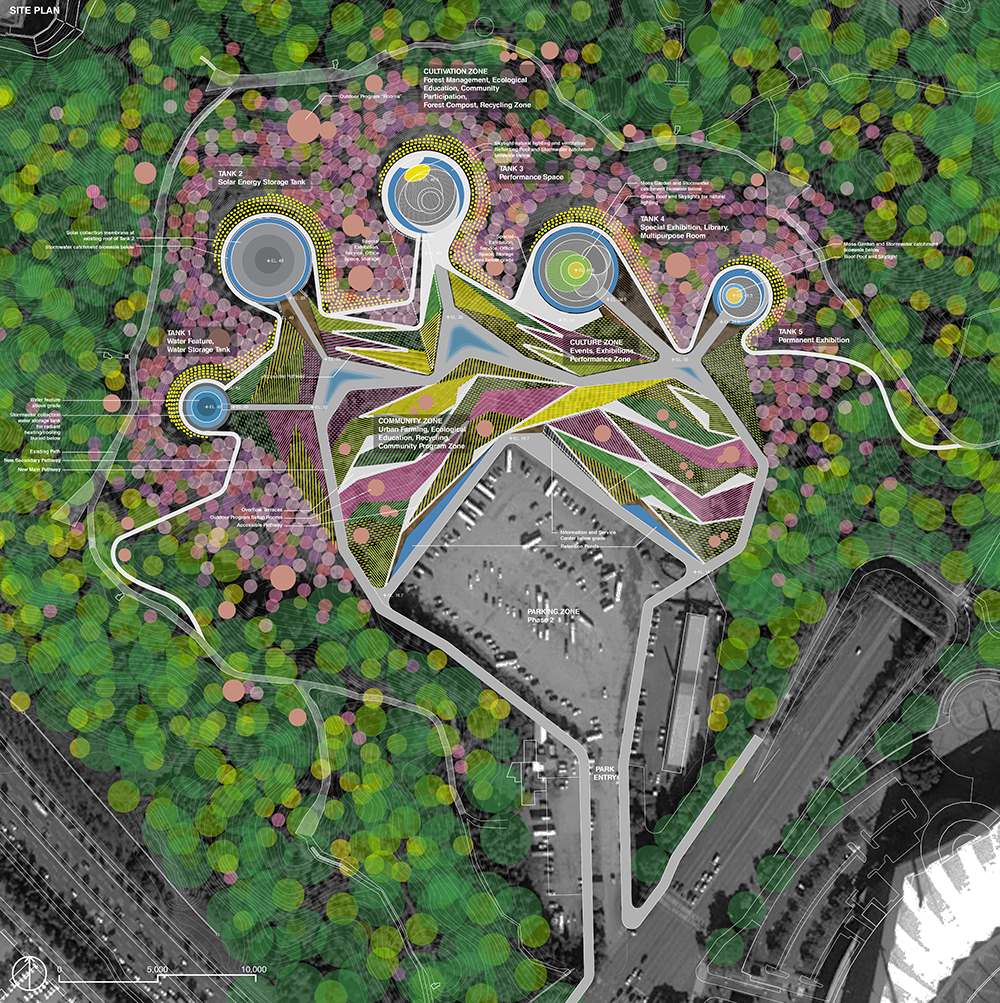 Respository of History
Maebong-san and the neighborhood of Mapo is a site that directly reflects the industrial, economic, and infrastructural history of modern Seoul. The Mapo Oil Depot, Nanji Landfill and the World Cup Stadium were mega urban infrastructures that were constructed in service to the ever growing demands of the city. With increased expansion, growth, and transformation of the urban environment, once vital industrial infrastructures become obsolete, decommissioned and often left fallow. Rather than being left as underutilized or
over developed, Mapo has reinvented the mega infrastructures of the past to become a repository of urban public spaces. Nanji Landfill has been converted into a recreational park, ecological education and energy reuse zone. The World Cup Stadium has become a multi-function cultural performance center and shopping mall.

CAMOSCAPE proposes a new typology of public space that links the site back to its infrastructural history (oil tanks, retaining walls, and camouflage) as well as its natural history (watershed, topography and native habitats). By connecting the industrial history and culture with the landscape, the Mapo Oil Depot site becomes an urban infrastructure for sustainable cultivation and cultural production.

Landscape of Urban Form
Maebong-san retained its topographic form and vegetation due to its assistive function as the background for camouflaging the oil tanks. With the dense mega developments of the city, the scale of the mountain establishes a unique urban form blurring the definition of what is architecture and landscape. Foreground and background constantly shifts back and forth between the scale of architecture, landscape and the city.

CAMOSCAPE expands on the urban form of Maebong Mountain by stratifying the foreground, middle ground, background of the topography, plantings and buildings to emerge and re-emerge as both figure and ground. The mountain becomes a new typology of performative urban form.

Infrastructural Structures
The current Oil Depot consists of highly engineered steel tanks for the storage of oil and concrete retaining walls for the protection of the tanks. Rather than the existing structures of the site becoming picturesque remnants of the past, it is critical for an adaptive reuse strategy to incorporate the existing structures, its material properties as well as existing site resources such as sunlight and rainwater runoff to become active participants in the environmental and energy systems required for the public programs.

CAMOSCAPE re-incorporates the existing steel and concrete structures of the site for their thermal and water management properties to enhance the utilization of passive solar and hydronic heating and cooling systems. Woven lattice steel structures are utilized to lift green/blue roofs as well as to provide the framework for a complete thermal enclosure for the new building programs. 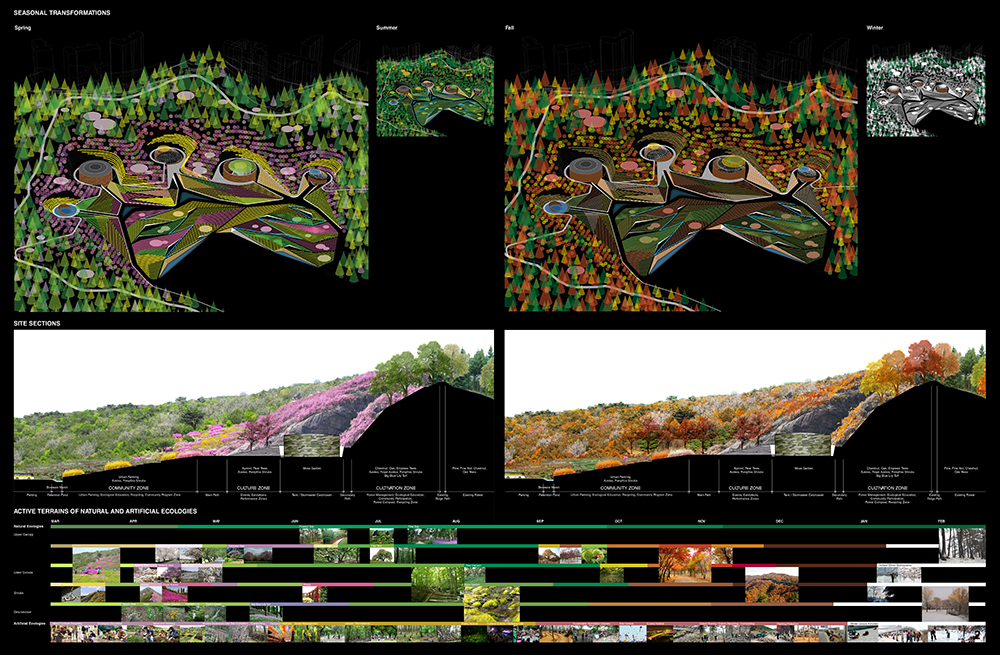 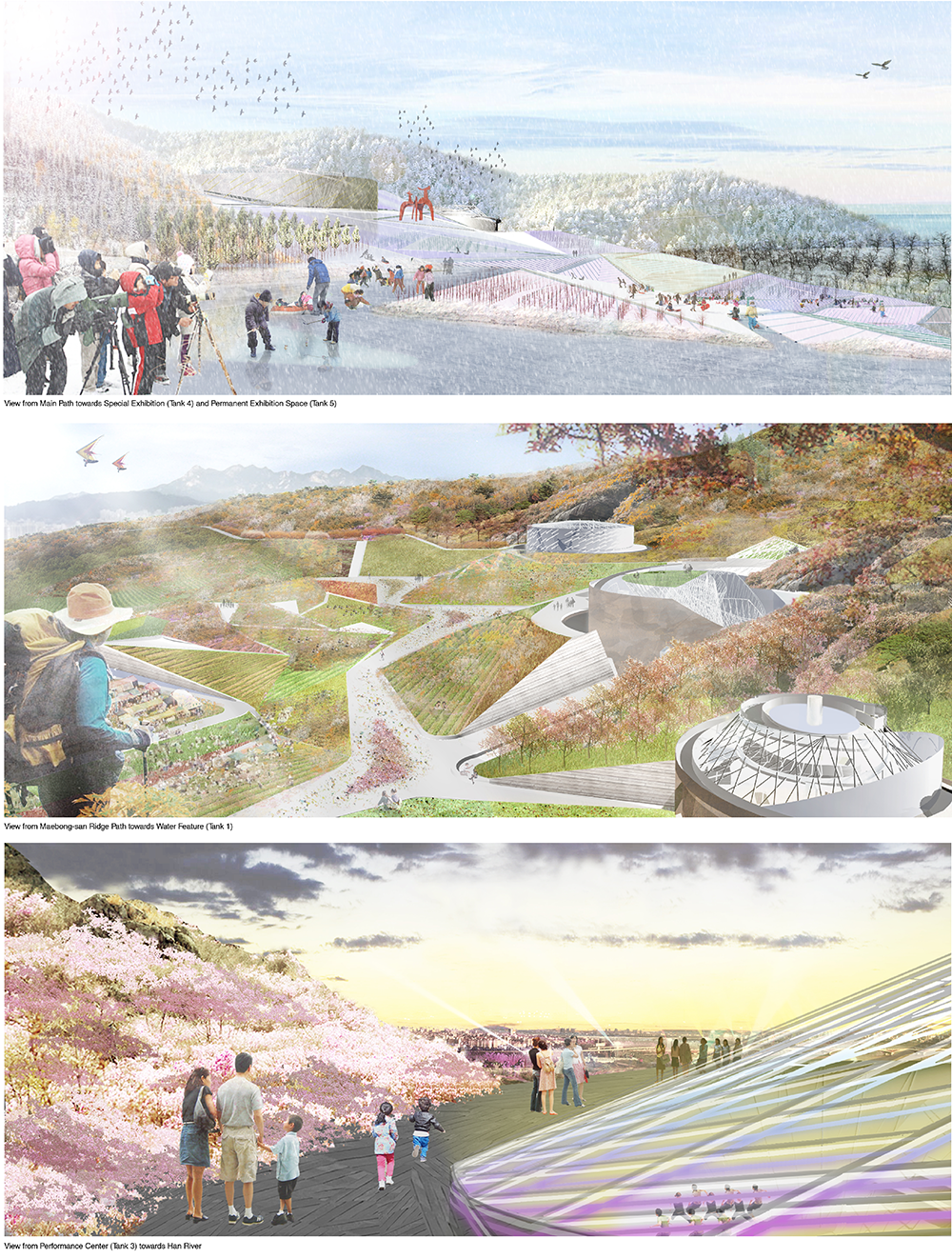