Negotiated Occupation | Politics of the Ruin 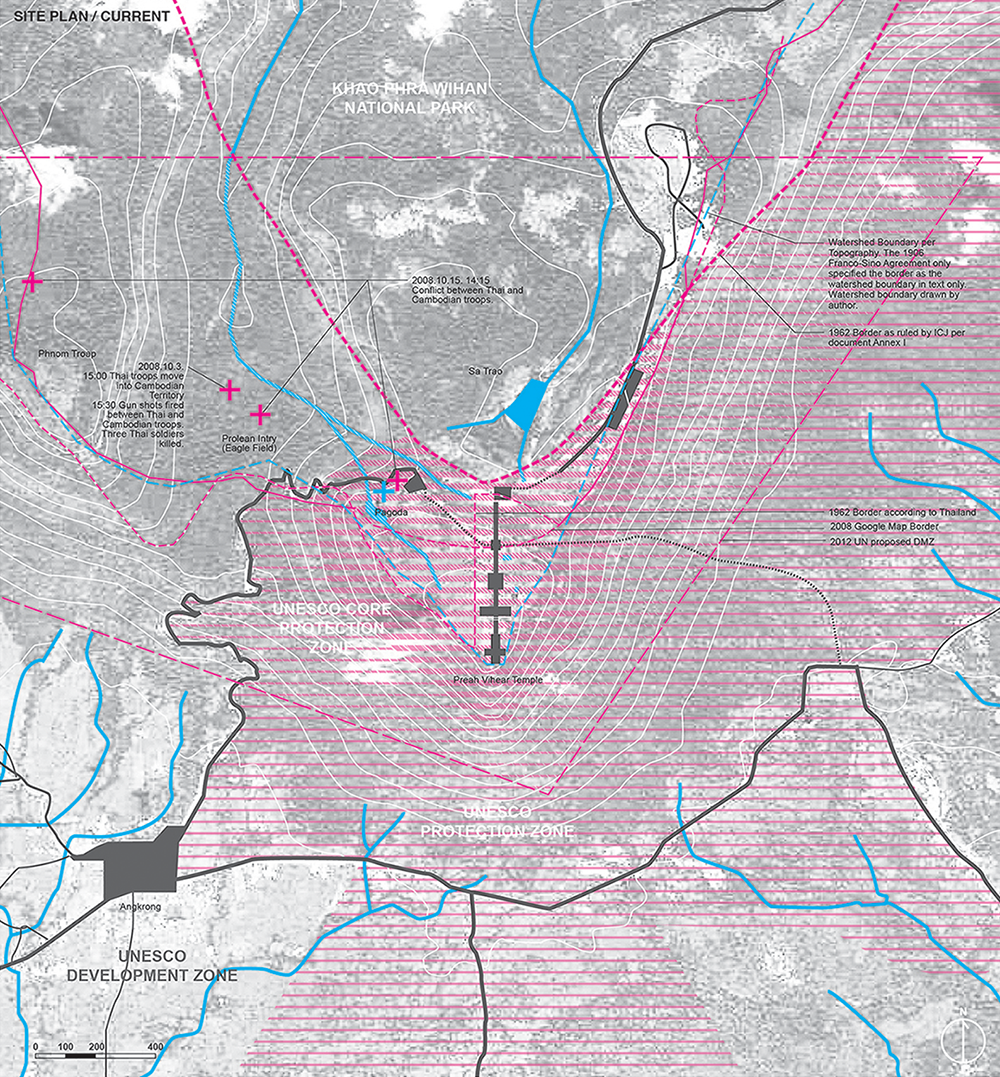 Negotiated Occupation proposes a reflexive linear infrastructure that not only supports sustainable regional development through historic restoration, preservation and tourism, but also operates as a mechanism of political negotiation and control.

The 1,100 year old Preah Vihear Temple is located at the border of Cambodia and Thailand and has been a highly contested site for more than a hundred years. But the conflict recently escalated when the Temple was designated a UNESCO World Heritage Site in 2008. This has made the site a subject of nationalist politics by both governments and due to its historic significance as well as its importance as a key source of tourism, military troops have been stationed around the site by both countries. Recent skirmishes have resulted in deaths of locals, soldiers and visitors, as well as damages to the Temple structure. In 2011, UN’s highest court ordered both countries to immediately withdraw troops and announced a “provisional demilitarized zone” around the site.

But despite the political tension and military conflict, environmental and preservation concerns have been mutual between the two countries. Negotiated Occupation proposes to utilize the mechanism of environmental protection and preservation as resilient strategies that can be utilized to mitigate political, military tension, while building the infrastructure for economic development and regional environmental sustainability.

Neutral Governance: Active Governance through Infrastructure
We propose establishing The Friends of the Preah Vihear Temple (FPVT) as a neutral third party NGO that will manage the UN imposed demilitarized zone (DMZ). 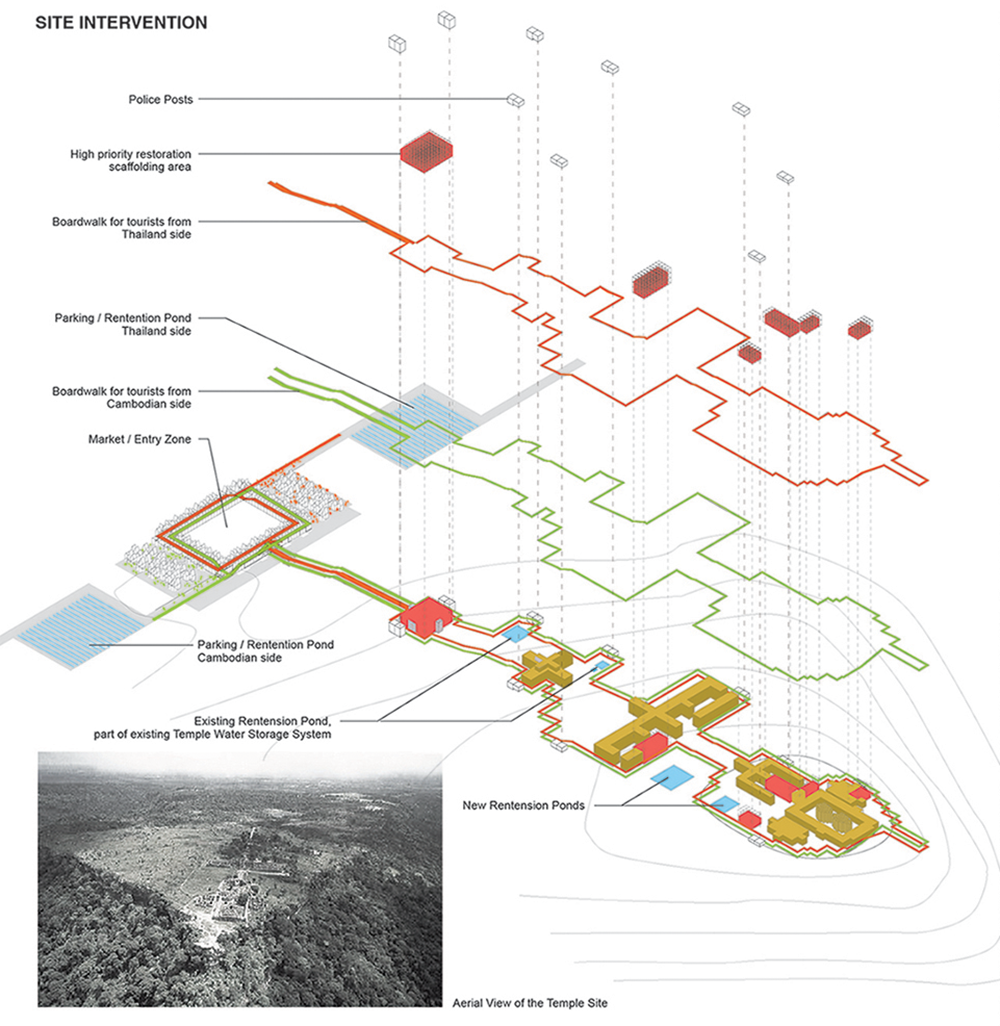 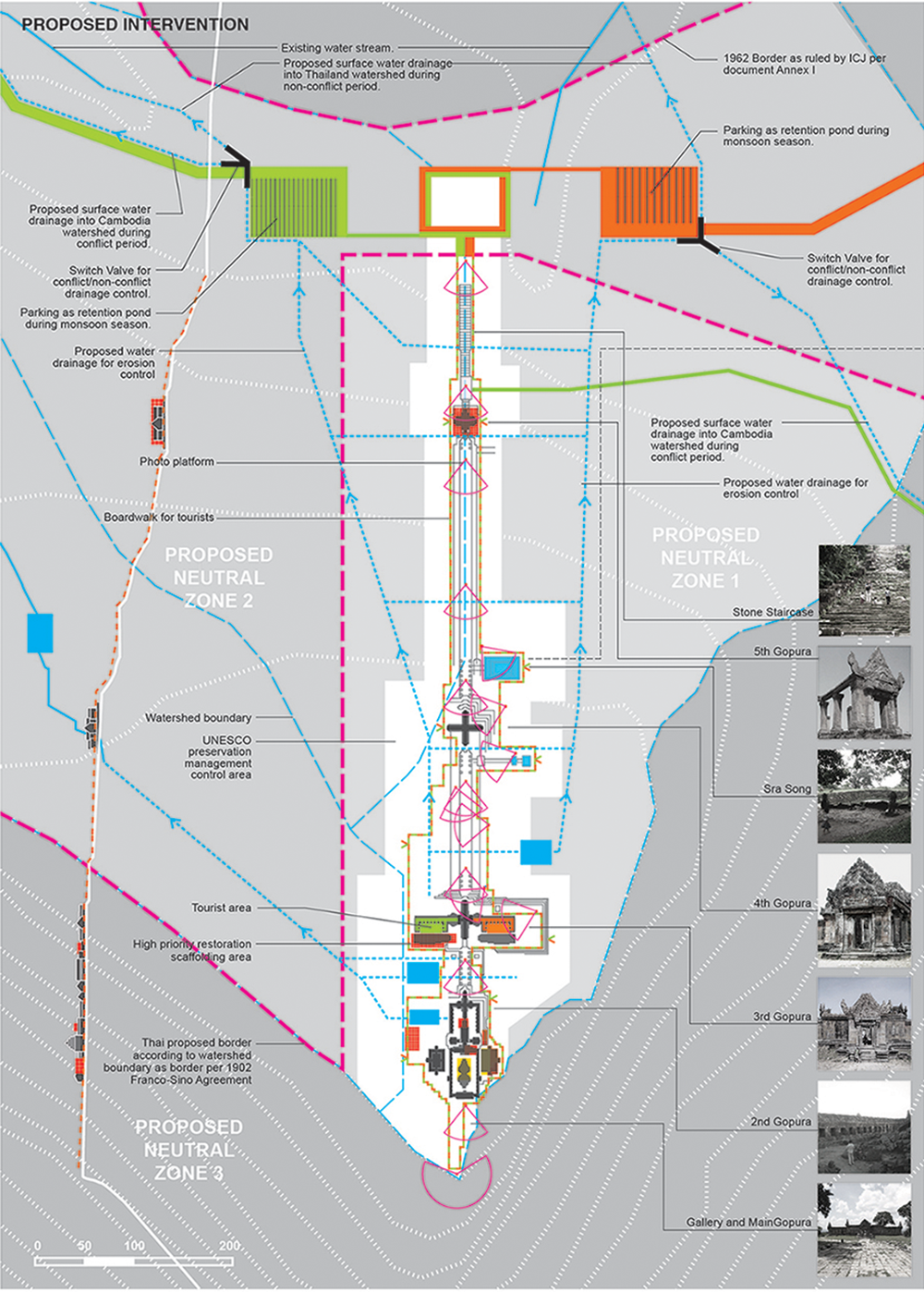 Cooperative Policing: Necessary Cohabitation
Thai and Cambodian police rangers will be paired to police the site as partners. The police posts will allow for both parties to guard their posts without visual interaction but will require the sharing of resources such as water, food and firewood for cohabitation.

Erosion Control and Water Management: Power of Water
New drainage systems and erosion control measures will be implemented to minimize destabilization of the Temple structure. Ancient water systems will be reactivated as part of restoration efforts. Also water storage capabilities will be enhanced through parking surfaces that can also function as retention ponds to maintain sufficient water supply during dry seasons. Switch valves are installed to control the direction of water drainage during times of military conflict. The watershed boundary no longer becomes a border conflict issue.

Sustainable Tourism: PV for the People
The tour and profit will be managed by the FPVT. The Angkor Wat model has been successful for the big tourism industry but has not been supportive of its regional community. The project envisions a new model where tourism directly supports the region and its infrastructure for the future. Open markets will be established as a cross border, tax free special tourism zone.

Scaffolding as Political Negotiator
Scaffolding systems are typically deployed as temporary and adjustable infrastructure for restoration, preservation work as well as protection of the site by tourists. The project expands on the typology of the scaffold to function as a neutral apparatus of control. During times of non-conflict, all areas can be accessed by all parties and the scaffolding functions as protection to the grounds. During times of conflict and political tension, tourists from either side can be separated to tour the site in parallel trajectories. The market area will allow for the local communities to market their products to both parties through all scenarions through a buffer zone in between the two spaces.