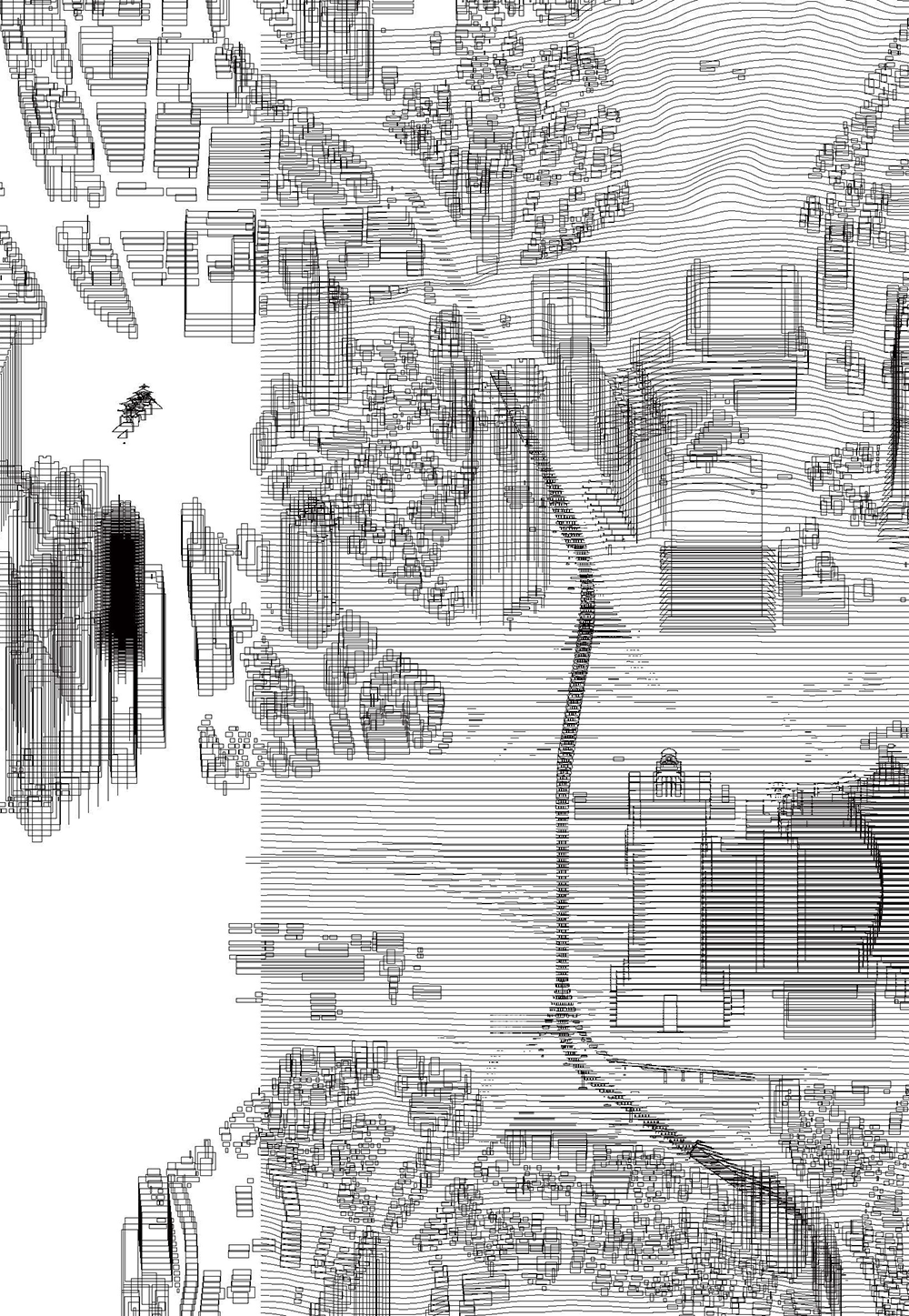 Seoul as an Old City of Binary Opposites
As one of the oldest capital cities in the world, Seoul is a living urban palimpsest of over 600 years since the Joseon Dynasty. Through its long history, the city is layered both with rich cultural history and memories as well as acts and traces of violence. The contemporary urban fabric is testament to the complex and turbulent history of what is now Seoul. Current Seoul has become a city of binary opposites; rich vs. poor, high vs. low status, conservative vs. liberal, old vs. young, Gangbuk vs. Gangnam, hillside slums vs. high-rise luxury apartments. As many people in the field of Seoul is also a city of binary extremes, where binaries clash, negotiate, mutate, conform, hybridize and transform to create a vibrant city that is diverse, complex, generative, collaborative and creative at the same time. Diverse urban programs coexist side-by-side and inside-out. It forms a highly conflicting yet co-dependent social ecology that has become the foundation of Seoul. Despite its regional architecture and urbanism note, these social, economic binaries are closely linked with the spatial systems of Seoul and profit driven developments have further enhanced the social, economic schism of its inhabitants.
We believe that urban public projects should no longer focus on enhancing replicable growth and exchange values for the city, but should provide sustainable, generative and irreplaceable use values to its neighbors and visitors.

Seoul is also a Vibrant City of Binary Extremes
Seoul is also a city of binary extremes, where binaries clash, negotiate, mutate, conform, hybridize and transform to create a vibrant city that is diverse, complex, generative, collaborative and creative at the same time. Diverse urban programs coexist side-by-side and inside-out. It forms a highly conflicting yet co-dependent social ecology that has become the foundation of Seoul. Despite its regional and ideological conflicts, the extreme diversity becomes a great sustainable development potential for Seoul and its future.
We believe that urban public projects should embrace and enhance the connective tissue of disparate neighborhoods and groups to provide an urban weave of ideas, experimentation, production and creation.

The New as a way to Record and Recycle the Memories of the Old
Starting from Ahyun Overpass, Samil Overpass and Cheonggye Overpass that were constructed in the early 1970s, it was the golden age of overpass infrastructures until the 2000s. However, maintenance expense became excessive compared to its utility, and there were public
concerns for the obstruction of urban scenery. Therefore the City of Seoul has proposed to tear down 90% of the city’s overpasses by 2020.
As with other disappearing urban infrastructures, Seoul Station Overpass is an important modern heritage and monument to Korea’s modern history. It embodies the diverse narratives of the city that have existed through its urban infrastructural development. We propose that the new Overpass record and trace the memories of the old Overpass as a means to contain and continue the site’s legacy. The reconnection of the pathways is an act of historical restoration and recovery of the spatial memory of the urban fabric of the City. Recycling of the existing Overpass is also a generator that can restructure, rearticulate and reconnect new and old adjacencies and spatial systems. The existing structure, material, form, and signage are to be preserved to embody the spatial memories of the site.

We propose that the new Overpass records and traces the memories of the old to continue the site’s legacy. The materials of the existing structure are to remain. The 25cm thick upper concrete and asphalt concrete slab, 95cm high concrete parapets and the four steel beam
girders supporting the slab and the piers will remain. The location of each pier that provides information on the construction, repairs and modification will be marked by a system of 15cm wide yellow lines that becomes a mechanism to trace the history of specific memories of the site. 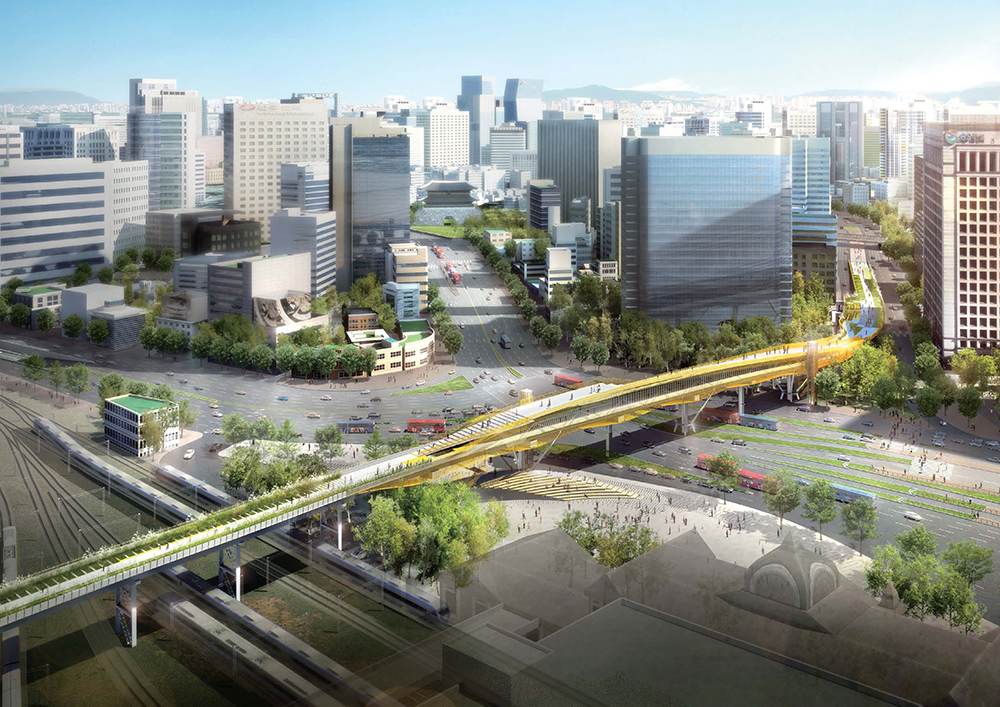 Hangang Skyway
Hangang Skyway is a double deck zone that crosses over the Hangang-ro artery. The existing single path splits vertically into two levels to create an upper deck zone that provides an alternative route of heightened visual connection where the expanded scale of Seoul can be experienced, while the lower zone provides shelter, intimacy and programmatic reprieve from the hussle of the city. The upper Skyway level expands the vistas of the city to experience the outer most boundaries of the city, while the lower semi-interior Overpass Level created by the skin enclosure provides intimate to large multi purpose spaces to integrate diverse urban activities and social, cultural interaction. 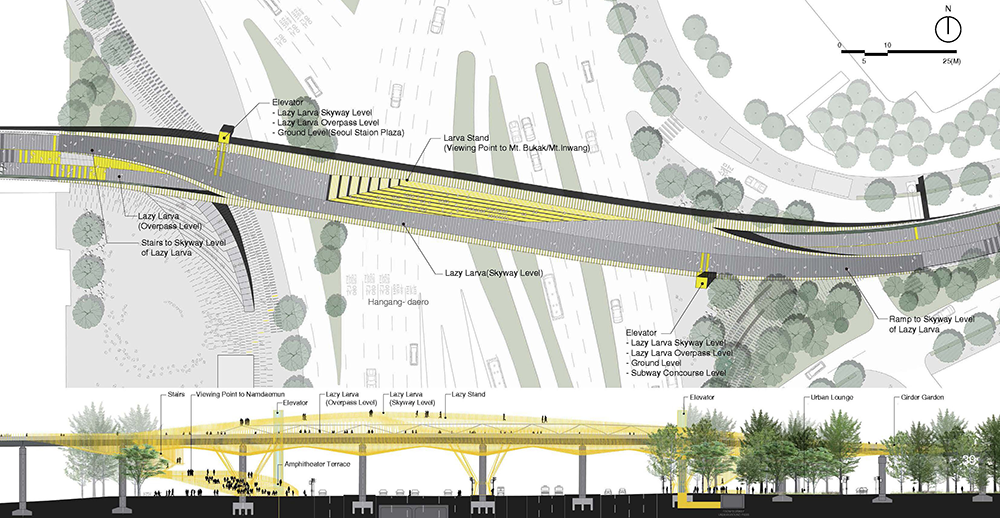 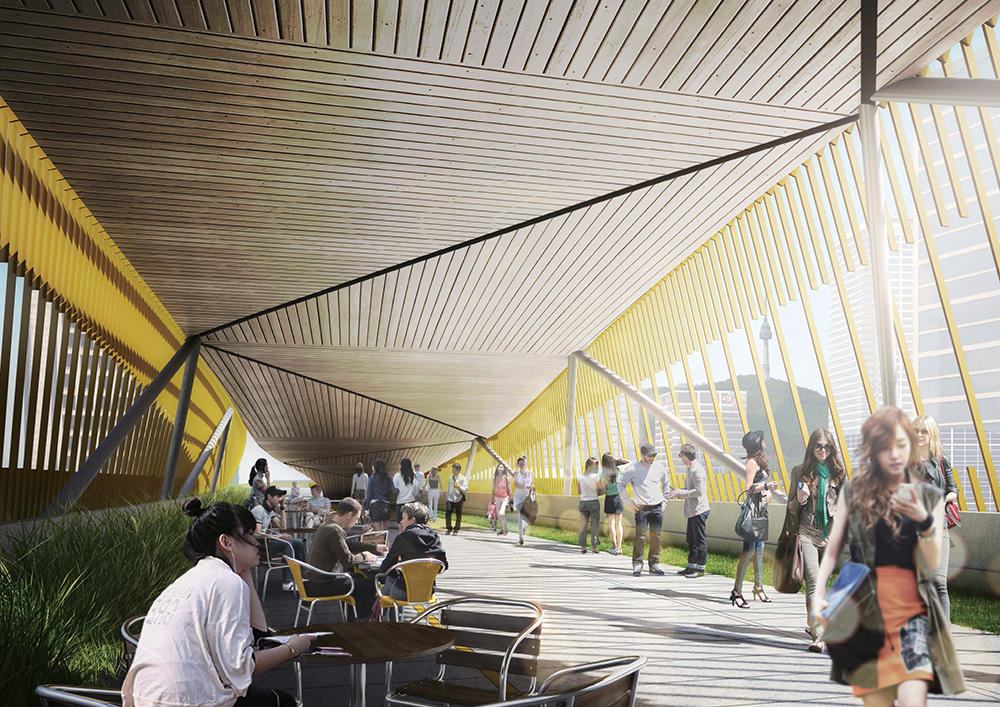 Seoul Station Terrace
The ‘Seoul Station Terrace’ Knot, is the central gathering place located immediately north of the Seoul Station Plaza, the old Seoul Station and the Seoul Railroad Museum. The Amphitheatre Terrace is integrated with a tourist, transit information booth underneath. The Terrace rearticulates the previously undefined, scattered, disparate, left over open space of the Plaza to reprogram and activate and cluster zones of use and circulation. It also creates a hierarchy of movement and use through the Plaza by establishing clear circulation paths from the subway exit (Line No.1) to the Overpass entry point for visitors, as well as the north south through traffic for the locals. The Viewing Deck as part of the entry sequence up to the Skyway Level will provide the best viewing area towards Namdaemun. One can also immediately access the highest point of the Lazy Larva Deck from this entry knot to enjoy the spectacular views towards the north and south of the city. 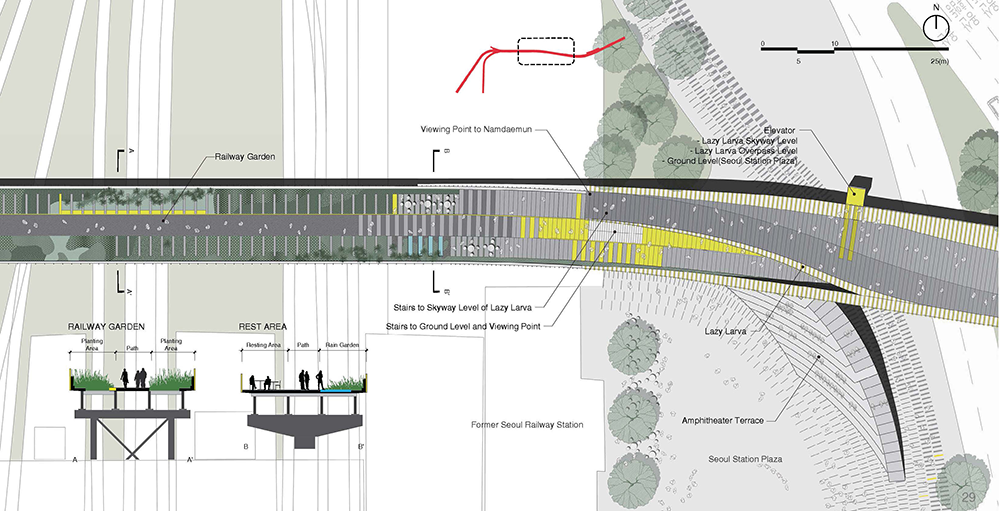 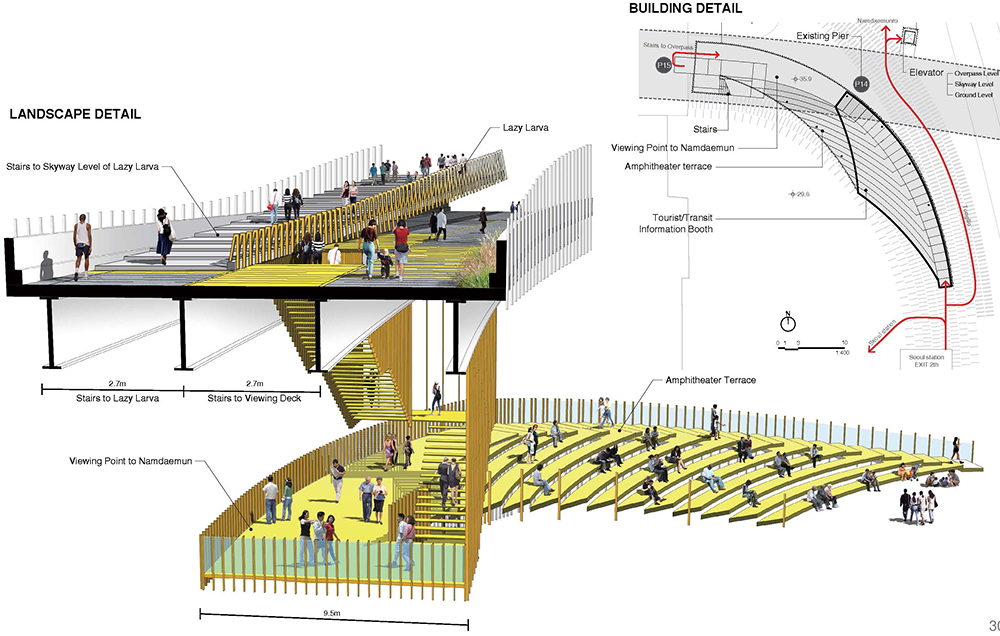 Three Way Plaza
The ‘Three Way Plaza’ Knot is where the three ramps intersect at the Overpass. A glass-walled garden and viewing deck located at the demolished edge of the Jungnim-dong ramp have great panoramic views toward Mt. Inwang, Mallidong and the east office towers. Yellow colored PE panels and furniture play a key role in navigating the city and create colorful gardens with green grasses, gravel and rainwater contained in raised yellow steel boxes. Stairs between the exposed I-beams move down through the Artist’s Garage space with cafe and exhibition, work space for young artists, and connect to the street. In the near future, the Knot will function as a key connection to the planned International Conference Hall to the north. Forest Theater
The ‘Forest Theater’ Knot, is the west gate of the Seoul Station Overpass. There are diverse landscapes such as the Malli-Forest, Rain Garden, Step Theater, Brunch Garden and Cafeteria that provide amenities for visitors and local people from Malli-dong and Cheongpa-dong. We propose the ‘Rain Garden’ and ‘Step Theater’ with forests, while utilizing the existing slope of the topography. Tall trees will cover the upper promenade of the Overpass to provide shade and comfort. Leaves, branches, and various flowering grasses together create abundant green
spaces at the ‘Brunch Garden’ and ‘Rain Garden’. water for the Rain Garden is aggregated from the surface runoff rainwater collected along the Overpass. 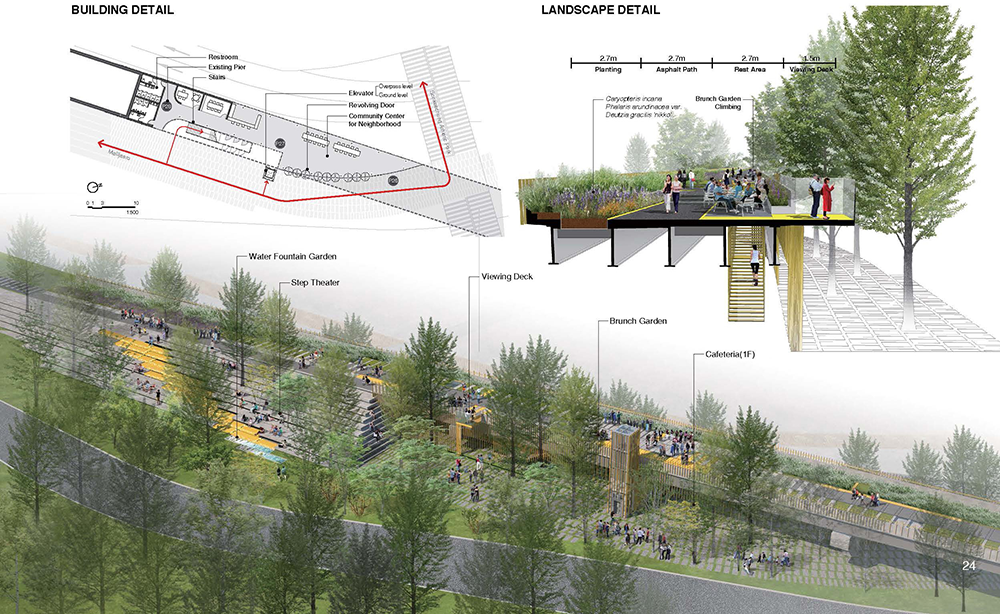 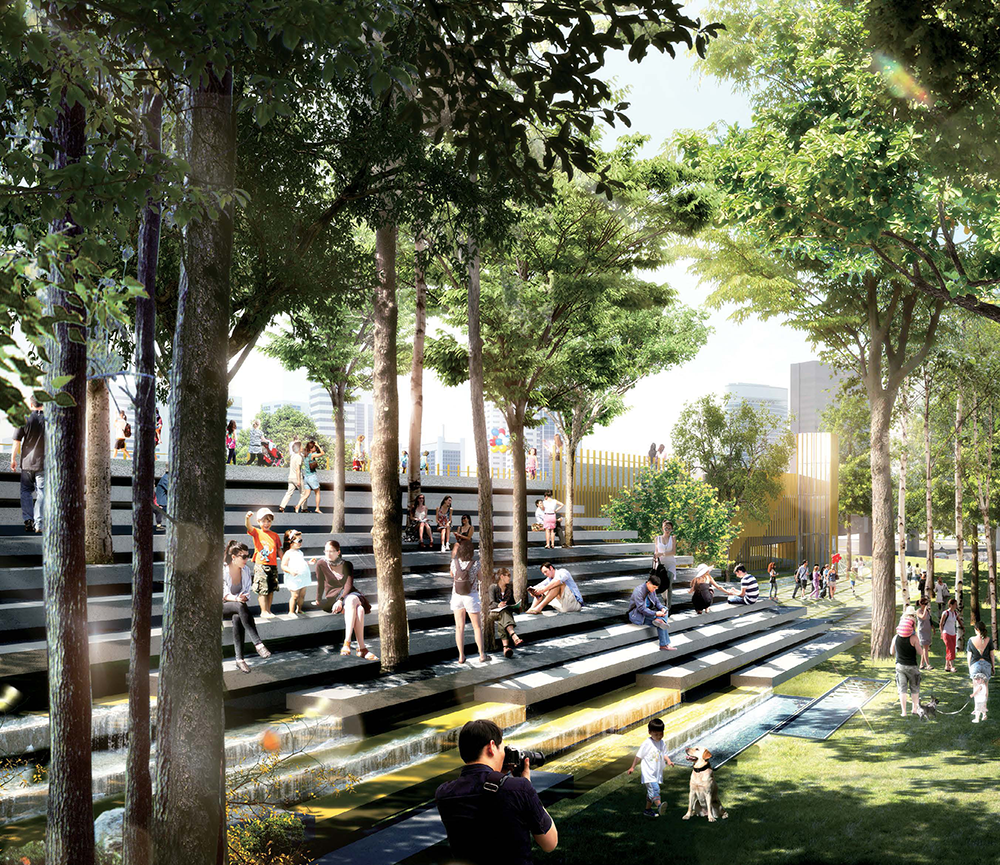 Hangang Maru
The ‘Hangang Maru’ Knot is located near the high-rise office buildings adjacent to Hangangdae-ro. The ‘Urban Lounge’ is designed with a new Gingko Forest, as an extension of the existing Ginkgo trees in front of the Yonesei building to the north. The area will provide the office workers from adjacent buildings with much needed rest space and access to outdoor and semi-indoor lunch eating, gathering, meeting areas.
Also, the elevator and stairs will allow visitors and office workers to access the concourse level of the subway below(Line No. 2) to both the street Overpass Level and the Skyway Level. The “Girder Garden” located on the overpass is a perennial flowering garden designed with the existing I beams exposed. Namdaemun Market Plaza
The ‘Namdaemun Market Plaza’ Knot, is the east gate of the Seoul Station Overpass and the main entrance of an already popular traditional market. We proposed a new subway exit from the concourse level of Heohyun Station in order to provide direct connection to the Seoul Station Overpass. In addition, a number of vehicular lanes will be reduced from six lanes to four for a pedestrian-only market plaza (10m width). The four vehicle lanes are to be paved with cobble stones. This area will be utilized as a pedestrian-only transit mall (market plaza) on special holidays and market days, leading to the revitalization of Namdaemun market. Food vendor stalls will be setup for the early morning merchants who come up from outside of Seoul. And storage area for street vendors and merchants will be provided underside of the Overpass. 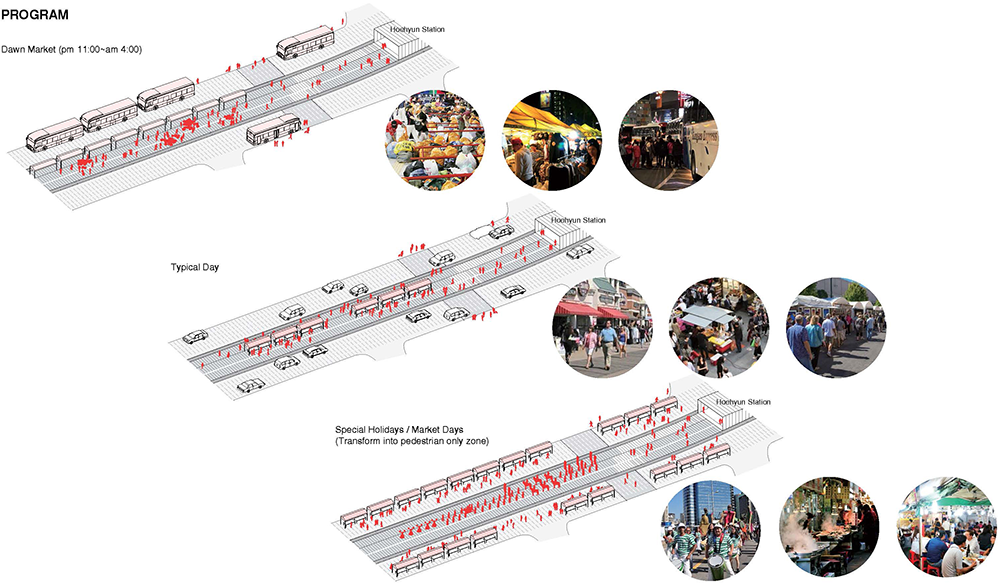 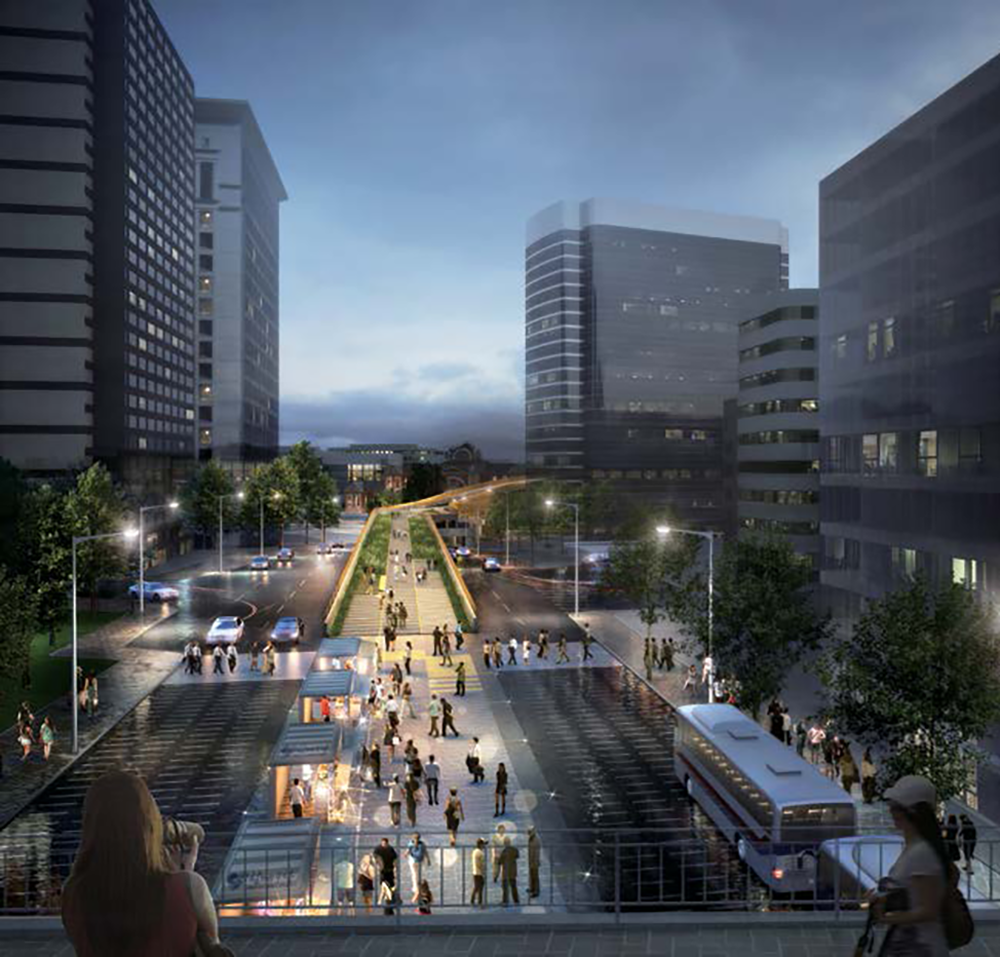